Lorelai Gilmore, a 32-year old single mom, lives with her daughter Rory in Star Hollow, Connecticut. It is a life story that revolves around the two of them as they transition through the ups and downs of life. Lorelai used to live in Hartford along with her rich parents, but felt suffocated by her environment at the time. She has an accidental pregnancy at the age of 16 and runs off in order to raise her daughter in Stars Hollow. Lorelai managed to find shelter and work at the Independence Inn, eventually rising to the position of executive manager.

The interactions between the two women are more like that of friends than mother and daughter. Lorelai turns to her rich parents for help when Rory gets accepted to a prestigious school, making it an awkward moment in the family where Lorelai has not seen her mother and father in years.Casting:

Despite having no acting experience, Alexis Bledel was picked to act as Rory Gilmore. Her portrayal of innocence and shyness made her an essential hire that would make up the core of her character in the show. Lauren Graham was initially sought out by casting directors, but had commitments to another show on NBC at the time. When time lapsed and the role of Lorelai had still yet to be filled, she was asked to audition anyway. Sherman-Palladino opted to cast her for the role during the audition, taking note of the way Graham acted for the role of Rory’s mother. Graham portrayed a level of conviction and sexiness in how she carried her character when she auditioned.Production:

Husband-wife duo Amy-Sherman Palladino and Daniel Palladino served as executive producers and wrote many of the show’s episodes. It took several pitches on Amy’s part to The WB network before it was approved. She made a suggestion of putting up a sitcom about a mother-daughter duo, drawing inspiration from her trip at Washington Depot in Connecticut.

Episodes would constantly be reworked between Amy and Daniel, with scripts passed on to their friends for inputs. The show carries a distinctive tone through, where it delivers in consistency due to the quality of Amy’s writing.

The pilot episode was filmed in Unionville, a suburban area of Toronto. Like Pretty Little Liars, much of the series was filmed in Burbank, California at the Warner Bros. Studio Lot. Supplementary background actors were thrown in to give the impression of a functioning town. The town square was frequently decorated by production designers with fake snow or fake leaves to give the imitate the weather of New England. Interiors of certain story locations such as the inn, the Gilmore mansion, Yale and Lorelai’s were all filmed within a sound stage. Only on rare occasions would the show be filmed on location. Case examples of this is exterior shots of Chilton, Rory’s prep school, filmed on location at the Greystone Mansion in Beverly Hills. UCLA and Yale were also filmed on the spot as part of the series.

Gilmore Girls had a successful run during its seven seasons, but problems came up along the way during its run. In 2006, WB had a merger with United Paramount that resulted in the creation of The CW network. Amy and Daniel managed to stick around but could not come to an agreement with network executives on a deal. Amy then decided that David S. Rosenthal to replace her as the series’ showrunner.

Amy commissioned songwriter and singer Sam Phillips to handle the music composition for the entirety to the series. Since Amy served as music supervisor in addition to her role as creator/executive producer, she was very fond of Phillips’ work and secured her involvement for the long run. The bulk of the score’s instrumentals included Phillips’ acoustic guitar and her voice, occasionally including the drums, piano and violin. Carole King’s ‘Where You Lead’, a 1971 track, is used as the series theme song. King created a new recording specifically for the show, where it was made as a duet with her daughter Louise Griffin. King makes several appearances in the show as Sophie, Star Hollows’ music shop owner, where she performed a segment of “I Feel the Earth Move’.

All seven seasons of Gilmore Girls were released in a home DVD release in 2007, which included cast interviews, behind the scenes footage, one episode commentary, and deleted scenes. The show is also available to be watched through different digital platforms, including Netflix, iTunes, and Amazon Prime.Review:

I was never particularly crazy about the sitcoms of the 90s during my younger years, as they didn’t seem to carry the slapstick laugh factor that shows like The Simpsons and Family Guy do. Gilmore Girls has the right blend of comedy and drama that leaves viewers satisfied. This is not an action-heavy TV series, it is a series that focuses on the life issues of both Lorelai and Rory Gilmore that viewers can relate to on a personal level.

One of the things that I respect about Rory is that although she is only a teenager, she has a level of maturity that is sorely lacking in teenagers from other TV shows. She loves to learn, is generally confident in herself, and makes good decisions that makes her a good role model for other female teenagers. The same could be said of her mother, where she is fiercely committed to her job and her daughter regardless of the life issues that get in the way. Their interactions with each other makes them seem sister-like.

One of Gilmore Girls’ strongest points is the ability for female viewers that are coming of age to help them cope with life struggles. Amy Sherman-Palladino’s writing shows throughout the series, offering a level of consistency that makes viewers comfortable with. The dialogue between the characters is usually fast-paced (which is typically Amy’s style of writing).

I would only recommend Gilmore Girls if you have the patience for watching sitcoms that lack action and if you’re a female viewer. If you’re one or both of these, then the show is definitely for you. It’s also a good series where families can talk about the two women comfortably since it resonates heavily with the issues of real life.Trivia: 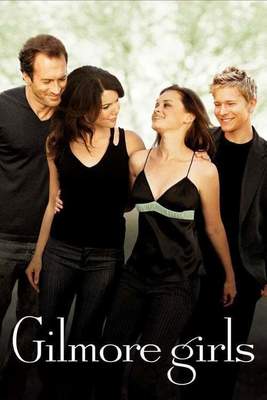 These are Providers which might be available to watch the show.
The official website of this TV-Show can be found here: http://www2.warnerbros.com/gilmoregirls/

* This is a sponsored link / the reviewed TV-Show might not be available with Amazon Prime Video Service / after the 30 days test period Amazon Prime might cause additional costs. The official website of this show can be found here: Gilmore Girls
Did you like reading this TV-Show Review? Yes No