The reboot of "Hawaii Five-0" brings the characters of the original series which ran from 1968 to 1980 back to the small screen with a modern twist. The show is helmed by showrunner Peter Lenkov with the original story idea and pilot script written by Alex Kurtzman and Roberto Orci. The writing and producing trio decided to provide a new take on the original characters instead of creating a sequel or prequel series.

"Hawaii Five-0" begins its story with Steve McGarrett, a Navy SEAL transporting a prisoner, Anton Hesse across South Korea before returning him to the U.S. As the convoy of vehicles makes its way across Korea, McGarrett receives a phone call from his father who calls him "Champ" for the first time ever. McGarrett's father is being held hostage by the brother of Anton Hesse, Victor, who states he is willing to trade the two prisoners to keep them both alive. As the two men talk, McGarrett realizes the convoy is being tracked by two helicopters which ambush the group. During the gun battle which ensues, McGarrett is forced to kill Anton which results in the murder of his own father by Victor.

Steve McGarrett returns to Hawaii for the funeral of his father which is attended by a group of dignitaries because of his position as a respected police officer. McGarrett is offered a job heading a special crime unit which will start its life investigating the death of the elder McGarrett before tackling corruption across the Islands. McGarrett initially refuses as he wishes to conduct his own investigation and enact his own form of revenge on Victor.

Returning to his father's home, McGarrett discovers a toolbox containing the name, "Champ" which he had never been called before by his father. Within, McGarrett discovers the details of an investigation into a gun runner which he is forced to share with the lead investigator into the murder, Detective Danny Williams. Realizing he cannot conduct such a complex investigation alone, McGarrett changes his mind about the special crime unit job and appoints Danny as his partner. McGarrett trusts the police officer as he is from New Jersey and only recently arrived in Hawaii to be closer to his daughter who moved to the islands with her mother. Danny is unhappy at taking on such a dangerous role but soon finds a form of grudging respect forming between himself and McGarrett.

The duo discovers a link between the death of the elder McGarrett and a local gun dealer, Fred Doran, who has a history of crimes. During the investigation, a fight breaks out and Danny is forced to kill Doran, much to the unhappiness of McGarrett. As the opening episode continues, the investigation takes on a new angle when the duo discover human traffickers have been smuggling Chinese immigrants into Hawaii and may have brought Victor Hesse into the region. At every turn, McGarrett and Williams are blocked in their investigation leading them to believe a mole may have infiltrated the Hawaii Police Department and is working against them.

Acting as the showrunner for "Hawaii Five-0," Peter Lenkov is extending a career which began with his writing of various comic books and acting as the occasional writer of various TV shows. Among the successful writing jobs undertaken by Lenkov is his episode of "CSI: NY" which led to an Emmy for veteran actor, Ed Asner. Lenkov was originally known as a comic book writer responsible for developing "R.I.P.D." and a number of other illustrated stories. The writer wrote episodes of various primetime shows, including "24" and "Nikita" before taking the role of showrunner for "Hawaii Five-0."

The role of Steve McGarrett was seen as pivotal when the latest attempt to reboot "Hawaii Five-0" was begun in 2010. Australian actor, Alex O'Loughlin won the role after starting his career in Australia before making the move to the U.S. to extend his acting possibilities. O'Loughlin came to prominence in the U.S. when he took a lead role in the CBS show, "Moonlight" which led to him signing a development contract with the network. After arriving in the U.S., O'Loughlin did not limit himself to TV acting but starred alongside Jennifer Lopez in the movie, "The Backup Plan."

Scott Caan takes the role of Danny Williams and follows his famous father into the acting profession, James Caan. Beginning his career as a roadie for various hip hop groups, Caan originally wanted to make a career in music before switching to acting in the early 1990s. It took Scott Caan until 1999 to make a major impression on the acting world with his role in "Varsity Blues." Caan has appeared in many Hollywood movies, including "Gone in 60 Seconds" and the "Ocean's Eleven" trilogy alongside Brad Pitt and George Clooney.

"Hawaii Five-0" is a co=productin of K/O Paper Productions and CBS Studios and is broadcast by the U.S. network. The show was recommissioned for its tenth season in Fall 2019 when it would be partnered with another reboot, "Magnum P.I." The show is reported to have become one of the biggest successes for CBS on a global scale with its broadcast taking in diverse nations including Mongolia, the U.K., and Australia.

Despite the international success of "Hawaii Five-0," the show has received a range of mixed reviews over the last few years with Rotten Tomatoes giving the reboot a score of 74 percent. Metacritic has been less kind with the show receiving an average critical response of just 56 percent. Professional critics have praised the acting and chemistry between the two leads, but believe the slow pace and lack of complexity held the show back in its early seasons. Over the course of its nine seasons, "Hawaii Five-0" has seen a fall in ratings from its record-breaking launch to more than 19 million viewers the show received an average number of viewers just over five million for its last season. Critics have argued the show is now a slick action drama capable of being enjoyed for an hour but not reaching the must-see TV status of cable shows, such as "True Detective."

"Hawaii Five-0" could have been very different if Alex O'Loughlin would have beaten out Daniel Craig to the role of James Bond in 2005. O'Loughlin met with "Casino Royale" director, Martin Campbell in Australia before flying to London's Pinewood Studios for a screen test for the iconic role. A stuntman working on the original series of "Hawaii Five-O" bought the 1974 Mercury Marquis made famous by Steve McGarrett and allowed it to be used in various scenes in the reboot. Attempts to reboot the franchise date back to the mid-90s when a one-hour pilot was produced but never broadcast, a few scenes can be viewed Online. To differentiate between the two versions of the show, the reboot of "Hawaii Five-0" uses a zero at the end of its title. 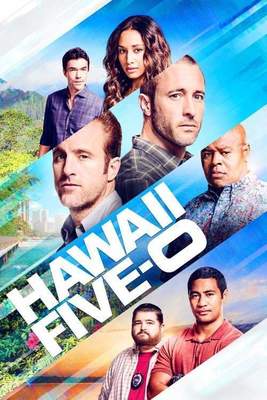 These are Providers which might be available to watch the show.
The official website of this TV-Show can be found here: http://www.cbs.com/shows/hawaii_five_0/

* This is a sponsored link / the reviewed TV-Show might not be available with Amazon Prime Video Service / after the 30 days test period Amazon Prime might cause additional costs. The official website of this show can be found here: Hawaii Five-0
Did you like reading this TV-Show Review? Yes No