A Complementary Take on the Arthur Conan Doyle Detective Classic

When it comes to Arthur Conan Doyle's amazing detective, Sherlock Holmes, there are two series that picture him in a contemporary environment: the BBC's Sherlock and CBS's Elementary. Elementary, like the BBC series, presents Holmes as a recovering drug addict that is nonetheless a brilliant detective. Unlike the British show, this series re-imagines doctor John Watson as doctor Joan Watson, who is played by Lucy Liu. Also, rather than being set in London, Holmes has left his consultancy at Scotland Yard in order to help Joan Watson and the NYPD in Manhattan.

Many of the plot points from the Victorian series of books remain intact in Elementary, and characters like Mycroft Holmes, the villainous Professor Moriarty, and Inspector Gregson all have major roles in the re-imagining. Like Watson, the series also has gender-swapped characters: Natalie Dormer, of Game of Thrones fame, plays a female version of the archvillain – Jamie Moriarty.

Unlike the source material, Sherlock's father, Morland Holmes is a major part of the series' plot; he has hired Doctor Watson to keep his son sober after a particularly disastrous relationship with London's Scotland Yard. Similarly to the original literature, Holmes and Watson develop a close, almost codependent relationship, and as a result of her help, he is able to get clean.

The series has a very procedural structure, which is common in American crime dramas, and it's usually broken up into a mystery-of-the-week style of format. Unlike some of the more by-the-book shows, Elementary is sure to take its time exploring the interpersonal relationships of its principal cast.

When the series starts, the relationship between the two main characters is contentious, and like in other versions of the Holmes story, it's hard to see the characters working out. Fortunately, the surgical and medical background of Watson makes her invaluable to Holmes' investigations, and that usefulness is what drives their relationship to a much closer level.

Additionally, Watson finds that her ability to think logically is very useful when helping Holmes come to his trademark deductions, and she soon learns that she's very well suited to performing detective work. While this Watson doesn't quite have the military background as other versions, she's very adept at handling the dangerous threats she sometimes faces in the gritty New York City streets.

Despite his addictions, this version of Sherlock Holmes is as adept at thinking and deduction as any of the other versions of the character that have been produced over the years. Also, like other versions, this Holmes isn't as well-versed in personal relationships and often comes off as standoffish and rude. Throughout the series, he struggles with his opiate addiction, which as it turns out, is a problem that was also experienced by his mother, May Holmes.

Since they were both released fairly close to one another, the two versions of Sherlock were bound to draw comparisons from critics and audiences alike, but thankfully, each retells the story of the character in its own way. Elementary is also a series with 24-episode seasons, so anyone suffering from Holmes withdrawal can certainly get their detective fix more often by watching Elementary.

Many of the characters in Elementary are based off of the Conan Doyle books, but there are a few additions that aren't in the original stories. Still, if you're going to watch Elementary, then these are the characters to check out:

When it comes to the production of this series, the showrunner here is Robert Doherty. Similarly to the other contemporary version of the Holmes mythos, this series was developed as an attempt to bring new modern life to the characters. While its initial announcement was met with skepticism, especially considering the development of Sherlock, critics soon saw that there was room for two series that were based on the same characters. The series is concluding with its seventh season, and Sherlock Holmes actor, Johnny Lee Miller, has become the actor with the most screen time as the character.

Elementary does a great job bringing the Sherlock stories to a modern audience, and it even manages to revitalize the somewhat stale police procedural genre of television. The characters are vivid, the plots are nuanced, and the action is very entertaining. Also, Lucy Liu's Watson is a perfect foil that helps add contrast to the somewhat standoffish Holmes. Despite their contrasting nature, these two characters become very close in a very realistic way. 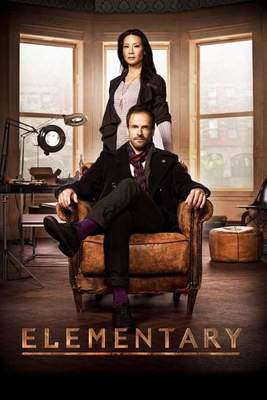 These are Providers which might be available to watch the show.
The official website of this TV-Show can be found here: http://www.cbs.com/shows/elementary/

* This is a sponsored link / the reviewed TV-Show might not be available with Amazon Prime Video Service / after the 30 days test period Amazon Prime might cause additional costs. The official website of this show can be found here: Elementary
Did you like reading this TV-Show Review? Yes No