A science fiction/Western drama series that is rooted in a disturbing future where visitors go to a theme park populated by android hosts. The park is a playground for visitors to indulge in their darkest fantasies without fear of retaliation by the hosts. Dolores Abernathy is the oldest living host that still exists. As the truth begins to unravel around her, she is forced to question the very nature of her existence.

Casting:Westworld has a very diverse cast of characters within the show. Evan Rachel Wood assumes the role of Dolores Abernathy. Additional notable roles is Thandie Newton as Maeve Millay, Sir Anthony Hopkins as Dr. Robert Ford, James Marsden as Teddy Flood, and Ed Harris as the Man in Black.

Nolan and Joy pointed out to the actors that they operated on a strict need-to-know basis, in order to keep the story as present as possible for all that were involved in the project.Production:

The show was created by Jonathan Nolan (younger brother of director Christopher Nolan) and Lisa Joy. Both of them currently serve as executive producers along with J.J. Abrams, Bryan Burk and Jerry Weintraub. Westworld saw release as a feature film back in 1973 (written and directed by Michael Crichton), along with a sequel called Futureworld that came out in 1976. Beyond Westworld came out in 1980 and was aired on CBS for three episodes before it got canceled.

In August of 2013, HBO made an announcement that a pilot was ordered for a potential TV series, with Joy, Nolan, Weintrab, Burk, and Abrams at the helm as executive producers. Ed Brubaker took on the role of supervising producer for the writing staff, and co-wrote Episode 4 with Nolan. HBO made an announcement that Westworld would premiere in 2015. The premiere was pushed back a year, with HBO releasing a teaser trailer for Season 1 in August 2015. It was later revealed through the trailer that the series would be released in 2016.

The idea to tell the story from the perspective of the hosts was suggested by Abrams. Nolan took that suggestion to heart and drew inspiration for the series from video games such as Red Dead Redemption, BioShock Infinite and The Elder Scrolls V: Skyrim as part of the series’ moral component. Further research in films directed by Sergio Leono gave reference points for the visuals and characters. The works of Philip K. Dick supplied information about the dilemma of artificial intelligence, with the Grand Theft Auto games giving reference on interlocking narratives and world-building.

Ane Crabtree served as the primary costume designer for the series, drawing influences from the Wild West period that spanned from the 1850s to the 1890s. All costume fabrics were custom-woven, printed and dyed for actors with speaking roles in order to capture the core essence of the individual characters. All of the costumes were also made from scratch, with hats being the most challenging as part of the creation process.

The opening sequence of the show was made by Elastic, which is the same production student that made title sequences for other HBO shows such as Game of Thrones, Rome and Carnivale. Patrick Clair was picked as creative director for the title sequence, where it took five weeks before the sequence was conceptualized. The sequence starts off with the rib cage of a horse, followed by hosts that were manufactured by industrial robots. The horse is subverted as part of an effort to show off Western landscapes in the context of robotics, so it made sense for him to have it viewed through the simulacrum of an eye.

Since Westworld is an HBO show, viewers can watch it through subscribing to the HBO Go platform.Review:

Like many other shows on HBO, this TV series continues the tradition of having gratuitous sex and violence as part of its core makeup. It’s got the right balance of the previously stated elements along with drama and fantasy to create a thought-provoking piece. The violence isn’t too over the top compared to Game of Thrones. Westworld is very dark, where the hosts are forced to question the very nature of their existence as toys for humans to play with. The science fiction isn’t readily apparent until you’re taken further in and the nature of Dolores is revealed.

Sir Anthony Hopkins remains true to form with his acting as Dr. Richard Park, the creator of Westworld. His coldly scientific character is heavily reminiscent from the time he starred as Dr. Hannibal Lector in Silence of the Lambs and Dr. Ibrahim van Hellsing in Francis Ford Cappola’s version of Dracula.

Westworld takes the genre of science fiction and hooks you in as the series delves further into its world. If you’re a big fan of dark and gritty sci-fi shows in the same vein as The Expanse and the new Battlestar Galactica, this series is for you.Trivia: 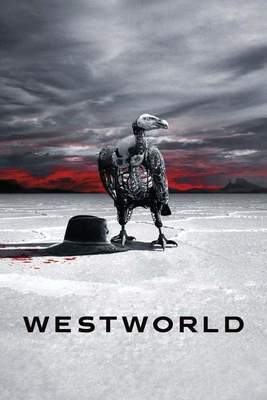 These are Providers which might be available to watch the show.
The official website of this TV-Show can be found here: http://www.hbo.com/westworld

* This is a sponsored link / the reviewed TV-Show might not be available with Amazon Prime Video Service / after the 30 days test period Amazon Prime might cause additional costs. The official website of this show can be found here: Westworld
Did you like reading this TV-Show Review? Yes No

Keeping Up with the Kardashians