The U.S. sitcom, "Friends" has consistently been voted to the top TV shows of all time and remains subject to bidding wars when the streaming rights are up for auction. The show premiered in 1994 and lasted a total of ten seasons with 236 episodes, including the season ten finale, "The Last One" which reached an estimated audience of more than 52 million Americans.

"Friends," tells the story of six friends living and working in New York as they look to improve their lives and find love in the late-1990s and early-2000s. The show opens with Monica about to go out on a date with a wine salesman called Paul who she met through her job as a chef. Monica is in the Central Perk cafe with her friends, Phoebe, Chandler, and Joey, and her brother, Ross. The group teases Monica about her date and want her not to sleep with Paul on the first date.

As the group is sitting in the coffee shop, a young woman in a wedding dress bursts in and heads to the counter to order a drink. Monica and Ross identify the young woman like Rachel, a school friend and former crush of Ross who only knew Monica as the overweight teenager who she hasn't seen since high school.

Rachel explains she has recently left her husband-to-be at the altar after he was caught cheating on her with one of the friends. Rachel explains she is still living under the financial assistance of her father and hopes to one day break free from the need to live off the work of her father or a husband. Monica reluctantly agrees to take Rachel in as a roommate on the condition she finds a job working somewhere.

Ross, Joey, and Chandler have made their way to the apartment of Ross and are trying to cheer him up as they assemble flatpack furniture. Ross explains he is depressed after his wife left him for another woman when she is heavily pregnant with his child and he is having to share the duties as a birthing partner.

Rachel moves in with Monica before the chef heads out for her date with Paul, which results in Paul spending the night with Monica. The friends gather in Monica's apartment for breakfast and are shocked to discover Monica fell for the lies told by Paul to get her into bed. Embarrassed, Monica is determined to repay Paul for his lies while Ross begins to realize the past he shares with Rachel could be the start of a new part of his life as his divorce draws closer. Ross tells the others in his group he has loved Rachel since he was a teenager and believes she could be the one he lives the rest of his life with.

Over the ten seasons of "Friends," the relationship between Ross and Rachel becomes a key focus for the writers while the other members of the group have various partners enter their lives. In the early stages of the show, the different comedic partnerships are clearly defined with roommates Joey and Chandler forming a duo alongside Monica and Rachel. The sibling rivalry between Monica and Ross adds to the tension as the ultra-competitive Monica tries everything to overcome the success of her older brother.

"Friends" was created by David Crane and Marta Kauffman who had worked together in the past on the Kirstie Alley project, "Veronica's Closet." Crane is an accomplished songwriter and publisher who had entered the TV writing industry in 1990 alongside Kauffman as the creators of the HBO broadcast show, "Dream On." The writers worked together on "Couples," and "Family Album." Kauffman is currently the producer of the Netflix series, "Grace and Frankie" while Crane recently created, write, and produced the critically-acclaimed series, "Episodes."

The concept for "Friends" started out when David Crane and Marta Kauffman sent their pitch to "Dream On" producer, Kevin Bright about a group of friends fresh out of college making their way in New York. Bright likes the idea and the writers began creating a plot revolving around the time spent in a coffee shop in Manhattan by the friends and pitched their idea to NBC. The network ordered a pilot and a team of young writers were assembled because the production team thought they would relate to the concept of "Friends."

Although set in New York, "Friends" was filmed on a sound stage in Burbank, California. "FRiends" never filmed outside the soundstages of California because Kevin Bright believed the loss f the love studio audience changed the energy of a sitcom and made location shots less funny. Only a few parts of "Friends" filmed outside the studio with the title sequence in the fountain which was filmed on the Warner Bros. lot in Burbank. In season four, the popularity of "Friends" in the U.K. prompted some location shots to be filmed in London when the characters attended the wedding of Ross and Emily in the British Capital.

Ten seasons of "Friends" were filmed with the show premiering to an audience of over 20 million and building to more than 30 million by the end of the first season. The show has been broadcast across much of the planet with "Friends" remaining the most watched English language TV program in India. The success of "FRiends" in the U.K> means it is still watched in Britain with the finale attracting one of the largest audiences ever for the British network, Channel 4. Over ten million viewers watched the finale when it was the first broadcast. In North America, the sitcom is streamed by the Netflix platform.

The majority of "Friends" ten seasons were given a positive critical response by critics and viewers alike. The first season was given a mixed response with many critics giving "Friends" a response detailing their belief the show had some chance of longevity. However, the second and third seasons saw a rise in the critical response to "Friends" which saw the show reach its ranking of 78 percent on Rotten Tomatoes. Later seasons were often criticized by reviewers for the overuse of guest stars in cameo roles with the series finale at the end of season ten leading to praise for its emotional farewell to well-loved characters.

The first title of "Friends" was "Insomnia Cafe" which referred to the fact the show took place in a coffee shop. "Friends" has become linked to the Central Perk coffee shop but NBC executives originally thought the show should replicate the success of "Seinfeld" by taking place in a diner. The first character to have an actor attached was Ross Geller, who Kevin Bright had already decided should be played by David Schwimmer after working with him on an earlier series. Bright was also instrumental in building the bond between the group of young actors when they were all chosen to play their specific roles. In the days before filming the pilot, the six friends were sent on a private jet to Las Vegas to form the friendships which would be seen throughout the ten seasons of the sitcom. 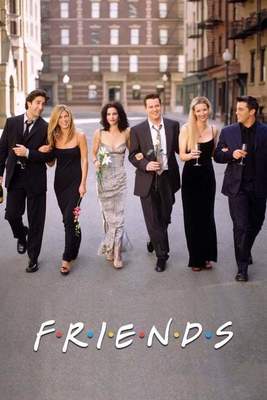 These are Providers which might be available to watch the show.
The official website of this TV-Show can be found here:

* This is a sponsored link / the reviewed TV-Show might not be available with Amazon Prime Video Service / after the 30 days test period Amazon Prime might cause additional costs. The official website of this show can be found here: Friends
Did you like reading this TV-Show Review? Yes No