The iZombie series is a loose adaptation of the comic book series of the same name that revolves around Liv Moore. She is a Seattle medical resident that gets invited to a boat party which quickly turns into a zombie arena. She reawakens and finds herself to be turned into a zombie, but her humanity is retained. She also finds out that she needs to eat the brains of dead corpses in order to maintain her humanity and not convert into a full-fledged zombie.

When she learned about her newfound status as a zombie, she left her career and broke up with her fiancee, Liv took up a job at King’s County Morgue where she eats the brains of the dead people there in order to maintain some semblance of herself. Her boss, Dr. Ravi Chakrabarti eventually finds out about her condition and offers to be her confidant while helping her find a cure. Both work in concert with Seattle PD detective Clive Babineaux to help solve numerous cases in the city, to stunning results.

Whenever Liv eats the brain of a dead person, she inherits some of the skills and traits of that person, as well as experiences flashbacks. Her visions are often triggered by sounds and sights of whatever she happens to cross paths with when that dead person was still alive. In the murder victims’ case, they give her insights as to who their killers were before they died.Casting:

Production:Diane Ruggiero-Wright and Rob Thomas developed iZombie as a TV series for The CW network, where it premiered on March 17, 2015. The fifth and final season premiered on May 2, 2019. Warner Brothers approached Rob to develop the series while he was doing editing work on the film version of Veronica Mars. He initially refused, but Warner Brothers insisted he took the job. Rob eventually relented and took on the role of executive producer for the show.

Prior to iZombie, Rob was trying to pitch his own zombie series before AMC picked up The Walking Dead, which is another comic to TV adaptation. Michael Allread drew the opening credits for iZombie since he was the co-creator and main artist of the comic book series.Review:

iZombie introduces some interesting concepts that breaks the old ‘dumb zombie’ formula. Instead of re-hashing the old plots where humans fight against the zombie apocalypse, the series instead is a police procedural from the viewpoint of a zombie (in Liv’s case, a zombie that tries to pass for human). It is actually the first live-action show that I can think of out of all the zombie shows that has a zombie as a protagonist. While there’s blood, violence and curse words (of which parents should exercise caution when teens are watching this), there’s good writing and bits of humor that is woven into the fabric of the show. It is entertaining in the sense that even though Liv’s still a zombie, her characterization’s pretty deep, making her brain-eating moments all the more tolerable in spite of her true nature.

Fans of the comic series may find the TV iteration lacking in some areas. The crime stories are oftentimes obvious and a tad too predictable. However, it manages to capture the appeal of Liv Moore and capitalize on that. It makes iZombie an engaging and enjoyable series that is worth viewing.Trivia: 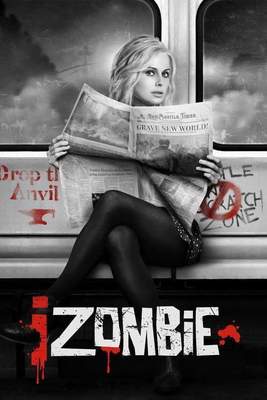 These are Providers which might be available to watch the show.
The official website of this TV-Show can be found here: http://www.cwtv.com/shows/izombie

* This is a sponsored link / the reviewed TV-Show might not be available with Amazon Prime Video Service / after the 30 days test period Amazon Prime might cause additional costs. The official website of this show can be found here: iZombie
Did you like reading this TV-Show Review? Yes No