"Shadowhunters" Brings Its Story To A Close In Season Three

The supernatural TV show, "Shadowhunters" was developed by showrunner Ed Decter with the aid of director and producer McG and the German production company Constantin Film for the Freeform network. The show is based on the teen fiction novel, "The Mortal Instruments" by Cassandra Clare.

"Shadowhunters" follows the story of 18-year-old Clary Fray who appears to be living an impressive life after enrolling at the Brooklyn Academy of Arts and setting out on an independent life. Clara arrives at her 18th birthday expecting to find her mother, Jocelyn ready to celebrate but instead finds her mother has been kidnapped and she must face up to a different future than she imagined for herself.

Clary is shocked to discover the life she believes she should be living is completely different from the world she has been born into. Her mother, Jocelyn is a member of the group know as shadow hunters who are a group of people with a mix of human and angelic ancestry. The aim of the group is to track down and kill those from the Downworld who wish to move into the human areas and cause problems. The Downworld is inhabited by a series of mythical creatures, including werewolves and vampires who sometimes need protection from demons who try to pass through the human world to access other mythical creatures. At other times, those from the Downworld are in need of the assistance of the shadow hunters when they are in danger.

A mysterious group known as The Circle is discovered to be part of the kidnapping of Jocelyn who many believe has more of a history with the group that she has told her daughter or friends. "Shadowhunters" follows Clary as she finds out more about her own heritage and must make some difficult choices about who she can trust to help find Jocelyn and protect humans from the Downworld.

Clary is drawn into the mysterious world of "Shadowhunters" and finds herself drawn into hunting those who would endanger the human world and the Downworld alongside the dangerous, Jace. The arrival of Clary in the Downworld sees her accept a new way of life which she was protected from throughout her childhood by her mother who needs Clary to remember her own past if she is to rescue her from her mysterious captors. Accompanying Clary on her journey into the Downworld is Simon, her intelligent but sheltered friend who carries much of the information she will need if she is to solve the many mysteries she faces regarding Jocelyn, The Circle, and The Mortal Cup.

"Shadowhunters" was developed and helmed by the veteran film and TV producer and director, Ed Decter who has a list of impressive credits to his name. Decter made his name as a comedy and drama writer in the 1990s with writing and producing credits including "There's Something about Mary" and "The Santa Clause" franchise. After starting his career in feature films, Ed Decter shifted his attention to television where he found even more success with his work on "In Plain Sight" and "Boy Meets World."

Former Disney and Nickelodeon actress, Katherine McNamara takes the lead role in the Freeform network series, "Shadowhunters." McNamara has been acting since her childhood when she began her career on stage in the play "A Little Night Music" with stars Catherine Zeta-Jones and Angela Lansbury. Throughout her career, McNamara has taken on a range of different roles, including "New Year's Eve" and parts of the "Maze Runner" franchise. The actress found fame appearing in teen comedies, such as "The Thundermans" and "Kickin' It."

The character of Jace in "Shadowhunters" is important to the story of Clary with the character played by English actor and model, Dominic Sherwood. The actor moved into professional roles in 2010 with an appearance in the TV show, "The Cut" and found a cult following after appearing in "Vampire Academy."

As with most shows developed for Freeform and other cable networks, "Shadowhunters" is produced in Toronto, Canada using locations including the science wing of The University of Toronto Scarborough. The show found an initial audience when it was revealed the feature film and music video director, McG was responsible for shooting the pilot of the series. The list of directors responsible for the first season of "Shadowhunters" includes a range of veteran and novice filmmakers, including "Kids in the Hall" veteran Kelly Makin and theater director Andy Wolk. The show was broadcast by the Freeform network with the global rights to stream "Shadowhunters" held by Netflix. The show was canceled after its third season of 20 episodes with Freeform commissioning a double episode to extend season three to 22 episodes with the aim of concluding Clary's story in full.

The first season of "Shadowhunters" has been met with a series of mixed reviews with many of the critics stating it does not delve into its own mythology deep enough. Many critics believed the story of Clary and Jocelyn should have given the show a sense of fun and adventure which was ignored in favor of realistic plots which weighed down the entire production. Online critics have given the show a series of mixed to poor critical ratings including the 45 percent rating provided by the users of Rotten Tomatoes. Metacritic states the show has a stunning visual style but the slow-moving plots weigh down the overall success of the supernatural series.

If she had not chosen to become an actress, Katherine McNamara could have had a career in academia after completing high school at the age of 14 and graduating from college at 17. McNamara has been acting since childhood but her co-star, Alberto Rosende has only two roles to show for his career prior to "Shadowhunters. Rosende appeared in the Tom Sellick-starring TV show, "Blue Bloods" and an untitled short film to start his acting career. "Shadowhunters" is not the first attempt to adapt the novels of author Cassandra Clare with the 2013 movie, "The Mortal Instruments: City of Bones" already bringing the series of novels to the big screen. 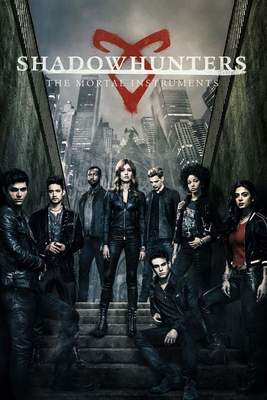 These are Providers which might be available to watch the show.
The official website of this TV-Show can be found here: https://freeform.go.com/shows/shadowhunters

* This is a sponsored link / the reviewed TV-Show might not be available with Amazon Prime Video Service / after the 30 days test period Amazon Prime might cause additional costs. The official website of this show can be found here: Shadowhunters
Did you like reading this TV-Show Review? Yes No

Keeping Up with the Kardashians