Better Call Saul is a spin-off from Breaking Bad's successful and globally popular drama series, and accompanies a character well known to fans of the series through their own past: Saul Goodman, windy lawyer and rogue.
The series takes place around the year 2002 and accompanies James Morgan "Jimmy" McGill on his way as a bad and unsuccessful lawyer. Long before he encounters Walther White and his venture in Albuquerque, Jimmy is more than out of the woods and out of the way of the law.

The quality of the work of the public defender Jimmy is limited and his own cunning way keeps him coming into conflict with the law. His office in the storeroom of an Asian restaurant and his rotting small car complete the picture. Among other things, the retrospective of the series also deals with the lawyer's past long before he had received his authorization as a Rechtspfleger.

A former con artist, Jimmy has recurrent problems with police in his native Chicago, and is ultimately convicted of an unfortunate coincidence for a sexual crime. To avoid the consequences of this error, he goes to his older Burder Chuck in the already well-known from Breaking Bad, located in New Mexico Albuquerque. There he is supposed to work as an assistant in his law firm. Through a distance learning, which concludes Jimmy on the side, he finally gets his own admission. After much back and forth, and a veto from Chuck's partner, Jimmy is not taken as a partner, but is self-employed as a lawyer.

Since he keeps getting carried away for unclean and illegal tricks for financial reasons, he gets himself into conflict with the law again, which does not necessarily make his clientele more serious. So the viewer is slowly but surely following the path from the former con artist Jimmy to the notorious defender of Walther White, Saul Goodman.
In addition to the confused defense strategies and advertising campaigns of the lawyer, the relationship with Brother Chuck and his former colleague Kim Wexler are at the center of the plot.
Chuck, who retired from the law firm after a nervous breakdown and mental instability, suffers from self-diagnosed electrosensitivity and is cared for by his brother. Incidentally, Jimmy still operates a legal guerilla warfare with the former law office of his brother, which could not be hopeless.
But not only Saul Godman's past and background explains Better Call Saul: Even the character Mike Ehrmantraut will be remembered by Breaking Bad fans.
The lawyer's future confidant first works as a car park attendant after giving up his job with the Philadelphia police.
He and Saul meet at first with mutual dislike, but then come closer in the course of the series and are slowly but surely familiar.

The series continues to play with hints and short sequences that can answer attentive audiences with some of the questions that arise in the plot of Breaking Bad regarding the windy lawyer and his sombre companions. That's how the origin of Jimmy's alias name is finally explained: During an attempted fraud in his time in Chicago, Jimmy first introduces himself as Saul. Later he speaks the line "'s all good, man" - indistinctly pronounced so also results in the last name of the opaque and quirky lawyer figure.

If you already like Saul Goodman in Breaking Bad, you'll finally get to know him better in Better Call Saul. The question of how he got hold of his lawyer's license must remain open at this point.

Cast:
The main role of Jimmy, or Saul, takes over, as in Breaking Bad before, Bob Odenkirk. His way of portraying the sleazy and unbelievably implausible lawyer is perfect - a compelling leading actor. He receives his German dubbing voice from Michael Pan.
Jonathan Banks also plays his role as Mike Ehrmantraut since Breaking Bad. His voice is translated in German by Eberhard Haar.
The female lead in the series is taken over by Rhea Seehorn, first spoken by Katharina Spiering, later by Claudia Galdy.
In the supporting roles, well-known characters and their occupations shine again and again: Be it JB Blanc as Dr. med. Barry Goodman or Luis Moncada as Leonel Salamanca - fans of the universe around the meth cook Heisenberg come here also at their expense.

Production and direction:
The series was initially commissioned by the American cable channel AMC. The first season of the Breaking Bad Spin-Off should initially consist of ten episodes. After some back and forth was the international premiere of the series in February 2015. The four seasons of the series so far have all been commissioned by AMC.
The publication of the series takes place in addition to the broadcast on AMC in the offers of the largest streaming providers. These include Netflix, Amazon Prime Video and the Apple iTunes Store.
Production of the seasons and episodes will be done by High Bridge Productions, Crystal Diner Productions, Gran Via Production and Sony Pictures Television.

Directed by Vince Gilligan in the first episodes, authors Thomas Schnauz and Gennifer Hutchinson are already known to the viewer for their work on Breaking Bad.

Review of the series:
Better Call Saul is more than just a quick spin-off to a popular series.
The figure of Saul Goodman is already so interesting in Breaking Bad that a deeper entry into her life is definitely worthwhile.
The critics initially took the series hesitantly, but later on enthusiastic. The increasing success of the series led to the fact that already the fifth season of AMC was commissioned and is prepared for broadcasting from 2020 onwards.
Bob Odenkirk's performance as Saul Goodman is without a doubt one of the best portraits of antiheroes that has spawned the serial landscape of recent years. This presentation and achievement earned him a nomination for the Golden Globe in 2017.
For Breaking Bad fans and anyone looking for a winning character, Better Call Saul is the right lineup.
The depth of the depicted characters and their emotions are absolutely awesome - and occasionally tempted to yell at the TV when Saul and co are about to talk upside down.

Trivia:
The success of the series is not just limited to the TV screen: AMC has published two successful digital comics: "Better Call Saul: Client Development" and "Better Call Saul: Saul Goodman and the Justice Consortium in the clutches of the Judgernaut!" , Among other things, details of the relationship between Saul Mike are presented here. 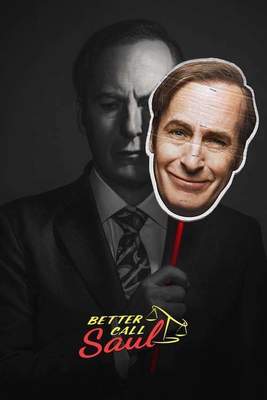 These are Providers which might be available to watch the show.
The official website of this TV-Show can be found here: http://www.amctv.com/shows/better-call-saul

* This is a sponsored link / the reviewed TV-Show might not be available with Amazon Prime Video Service / after the 30 days test period Amazon Prime might cause additional costs. The official website of this show can be found here: Better Call Saul
Did you like reading this TV-Show Review? Yes No