"Altered Carbon" is based on the book of the same name by Richard K. Morgan and takes place three centuries in the future. The show was developed for the Netflix streaming service by screenwriter and producer, Laeta Kalogridis with the showrunner overseeing a second season commissioned by Netflix in 2019.

Three hundred years in the future, the human race has been dramatically altered by a piece of alien technology acting as a memory stack which allows those with enough money to use their bodies as a sleeve for their own memories. Instead of dying when the body of the individual reached its natural end, the body has become a vessel with the use of alien technology plugging in the memories of the owner to the spinal column of each person.

Takeshi Kovacs is awoken from suspended animation in his jail by the wealthy individual, Laurens Bancroft. The wealthy man is part of an elite group within society who have the money and power to transfer their memories to different bodies and theoretically live forever. Bancroft reveals he can be killed but the memories held in a stack plugged into the spinal column at the back of his neck must be destroyed for this to happen.

Bancroft reveals he uploaded his memories to a stack moments before he believes his body was murdered and wants to know who is behind the attack on his life. Kovacs is a former rebel fighter who has spent his career trying to bring democracy to the planet after the ruling elite, known as "Meths" took control prior to his arrest, two centuries earlier. Kovacs does not feel there is anything he can do for Bancroft and refuses the promise of his freedom and becoming a wealthy man if he agrees to look for the person who tried to murder the man.

Kovacs is visited in jail by a police officer, Ortega, who wants to know everything he and Bancroft were discussing. The former rebel explains he has no interest in working for Bancroft and does not believe the story he told. Kovacs mind is changed when a hitman appears and tries to kill him, the former rebel explains he has been dead for over two hundred years and has only been in contact with Bancroft. As he now believes the story of Laurens Bancroft, Kovacs decides to accept the money and take the case of the murder to protect himself as much as Bancroft.

Things are complicated by the fact Kovacs has been given a new body or sleeve which he must come to terms with and accept he will be the subject of some interest. Bancroft attempts to assist his investigator by assembling a list of his enemies which is longer than Kovacs could have imagined. Being a former rebel means Kovacs continues to struggle with the concept of helping those he fought against in the past.

"Altered Carbon" has a showrunner who has quickly risen to the top of the Hollywood production sector in the form of Laeta Kalogridis who began her career by selling a script in 1995. An executive producer for the record-breaking "Avatar," Kalogridis has worked on movies including "Scream 3," "Alexander," and "Shutter Island."

The role of Takeshi Kovacs is played by Joel Kinnaman, a Swedish actor who has found fame in recent years on the TV and in film. Born in Stockholm, Sweden, the actor began his career as a child actor in a long-running Swedish soap opera before returning to his studies. After finding critical acclaim on the stage in a production of "Crime and Punishment" in Malmo, Kinnaman has appeared in the TV show, "The Killing," and on the big screen in "Suicide Squad."

Classically trained actor James Purefoy appears in "Altered Carbon" as the mysterious Laurens Bancroft. The Netflix series is the latest installment in the career of Purefoy which began on the London stage when he appeared in productions of "Romeo and Juliet" and "The COnstant COuple" for the Royal Shakespeare Company. Purefoy was among the frontrunners to play the iconic role of James Bond in 1995 and in 2005 before finding fame in the Fox thriller, "The Following."

Laeta Kalogridis first optioned the novel, "Altered Carbon" in 2003 with the intention of creating a feature film but found the themes of the novel to violent for the majority of major studios. Knowing the material needed a large budget, Kalogridis knew a major studio needed to be involved to match her vision for the adaptation and eventually found a home with Netflix. Filmed in Vancouver, British Columbia, the showrunner has revealed the show has a budget larger than that of early seasons of "Game of Thrones" on HBO. The links between "Altered Carbon" and "Game of Thrones" continue with Miguel Sapochnik taking directing duties for the pilot episode which he found time for as he prepared to direct episodes for the final season of the HBO fantasy series.

Despite its big budget and popular source material, the first season of "Altered Carbon" has received mixed critical reviews with a 65 percent rating on Rotten Tomatoes. The show is visually stunning with the majority of critics praising the direction and overall design. However, the plot has been criticized in some quarters with the complex nature of the murder and conspiracy plot often becoming confused for some viewers and critics alike. The commissioning of a second season allows "Altered Carbon" to address some of the problems from its first season which have been described as problematic.

"Altered Carbon" refers to the wealthiest in society as "Meths," which is a reference to the biblical figure of Methuselah who lived to be more than 900 years old. Lead actor, Joel Kinnaman almost turned down the role of Kovacs because of a rare condition he had since childhood giving his chest the impression of sinking inward. The nudity and the sheer number of times he was shirtless led the actor to consider not appearing on the show until he had surgery to reverse the condition. 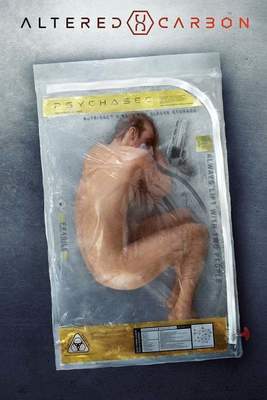 These are Providers which might be available to watch the show.
The official website of this TV-Show can be found here: https://www.netflix.com/title/80097140

* This is a sponsored link / the reviewed TV-Show might not be available with Amazon Prime Video Service / after the 30 days test period Amazon Prime might cause additional costs. The official website of this show can be found here: Altered Carbon
Did you like reading this TV-Show Review? Yes No

The Daily Show with Trevor Noah