Dick Wolff is one of the legends of procedural TV drama after being involved in the "Law and Order" franchise. As the many spinoffs of his early franchise began to wind down, Wolff found a new area of interest when he created the surprise hit, "Chicago Fire" for NBC. The success of the show and one of its characters, Detective Sergeant Hank Voight led to a spinoff, "Chicago P.D."

"Chicago P.D." starts with the main character of Voight languishing in jail following the events that took the character to jail in "Chicago Fire." Voight has little chance of release until his handlers from Chicago's internal affairs department make their way to the jail and free him, explaining he is too important to them to remain in prison. Upon his release, Voight is given the lead role in a major crimes unit which allows him to assemble a team he trusts implicitly. Throughout the first season, Voight remains a conflicted and controversial figure for his team as they struggle to trust him at various times.

One of the first members of the team to be given her role by Voight is Detective Erin Lindsay who arrives for her first day with the unit and tapes a tattered business card on her locker. When her colleagues ask her about the reasons for the battered piece of paper, Lindsay replies she has carried it with her for 13 years, which predates her time as an officer with "Chicago P.D." The mystery is given little time to play out in the first show which begins with a shootout and continues at a fast rate throughout the show.

Voight spends much of the first episode assembling his team and introducing them, including the veteran Alvin Olinsky and the academy graduate Adam Ruzec. The main plot in the first episode revolves around Voight entrusting the case of the "The Octopus," a violent drug dealer who has kept his identity hidden as he looks to keep control by beheading those who do not follow his commands exactly to the newly appointed Kim Burgess.

Kim Burgess has an interesting backstory as a former flight attendant who was unfulfilled by her role and wanted to find some way of giving back to her community. Burgess finds herself being dragged closer and closer to the orbit of "The Octopus" who she soon discovers knows her investigation is taking place. As the drug dealer begins to exert his influence, Burgess begins to worry there are members of the team she cannot trust as Voight fails to keep her entirely protected from the war beginning between his unit and the drug gangs. The fate of Burgess and the family of her fellow Unit team member, Detective Dawson may have been taken out of their hands as the net tightens around the team.

The series was born when producer and writer Dick Wolff worked alongside Matt Olmstead to create a new series linked to "Chicago Fire" created by Wolff earlier. Wolff had been working in Hollywood since the 1980s when he found fame writing the movie Masquerade. His first Emmy nomination came for the episode, "What are friends for?" or "Hill Street Blues. Wolff would later join the writing team of "Miami Vice" and act as a producer for seasons three and four before creating the "Law & Order" franchise.

Matt Olmstead acts as the showrunner for "Chicago P.D." which is his latest attempt at bringing success to the police procedural genre. Olmstead has worked on dramas such as "NYPD Blue," and the short-lived series, "Blind Justice" and "Brooklyn South." The writer created a series of episodes of the shows, "Chicago Fire" and "Prison Break" before beginning work as the showrunner of "Chicago P.D."

Jason Beghe had found a resurgence in his fame when he took the role of Detective Voight in "Chicago Fire" and reprised it in the spinoff, "Chicago P.D." Beghe began his career in the 1980s when he worked as a model in Europe and North America before starting his acting career with a movie role opposite Susan Sarandon. The actor has had a series of guest-starring roles in shows such as "Perry Mason," "CSI," and "Criminal Minds."

Police Detective Erin Lindsay is played by Sophia Bush who has been working in various TV shows since "National Lampoon's Van Wilder." The actress found fame in 2003 when she appeared in "One Tree Hill" and appeared in movies such as "The Hitcher" and "John Tucker Must Die."

The show is filmed on location in Chicago with the first season of "Chicago P.D." using a mixture of some of the most famous locations in the city. Much like the move to New Orleans of the "NCIS" franchise, "Chicago P.D." features a number of smaller locations such as restaurants and bars which would be known to Chicago residents.

"Chicago P.D." is a co-production of Universal Television and Wolff Productions for NBC and is distributed around the world with networks in Australia, the U.K., and Thailand broadcasting the show. Like other parts of the "Chicago" franchise, "Chicago P.D." is streamed through Amazon Prime and iTunes.

Since"Chicago P.D." was released in 2014, it has been garnering mixed to average reviews with both Metacritic and Rotten Tomatoes giving the show a middling rating of around 50 percent. Professional critics were also mixed in their criticism of the show which included many unfavorably comparing "Chicago P.D." to the long-running "Law & Order" franchise. However, for many, the fast pace and unrelenting action of the first season was enough to keep the show moving forward without the viewer feeling the need to change the channel.

In terms of viewers, "Chicago P.D." has slowly built a strong fanbase which has continued to grow across the first six seasons with the first season attracting an average of just under seven million fans. The show attracted around eight million viewers to the second to fourth seasons with season six seeing a jump in ratings to over ten million.

The character of Detective Voight had been written out of "Chicago Fire" meaning the writers had to come up with a way of bringing back the character from jail which would be believable. Many of the cast and writers were shocked when a similar location to that used by Voight to interview bad guys outside the jurisdiction of the department was discovered in Chicago prompting a major investigation. The show has often faced rewrites because of the decisions of network executives, including the issue of bringing the season three cliffhanger for "Chicago Fire" into the world of "Chicago "P.D." because of a scheduling conflict. 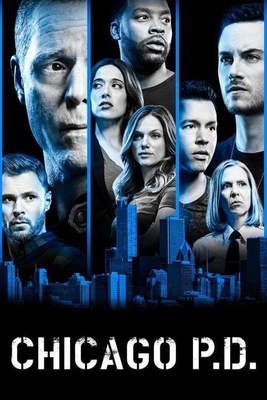 These are Providers which might be available to watch the show.
The official website of this TV-Show can be found here: http://www.nbc.com/chicago-pd

* This is a sponsored link / the reviewed TV-Show might not be available with Amazon Prime Video Service / after the 30 days test period Amazon Prime might cause additional costs. The official website of this show can be found here: Chicago P.D.
Did you like reading this TV-Show Review? Yes No