"The Middle" takes a traditional approach to the U.S. sitcom and revolves around the lives of the members of the Heck family living in the Midwest. The family is headed by Frankie Heck, played by "Everybody Loves Raymond" actress Patricia Heaton. Frankie acts as the narrator of the sitcom and is a working-class woman who is trying to juggle the problems of her family while struggling herself in the role of a used car salesperson. Frankie and husband, Mike are constantly struggling to make ends meet financially as they try to give their three children the best life possible in the fictional town of Orson, Indiana. Mike is the manager of a nearby quarry when the first season premieres and appears to have trouble opening up emotionally to his wife and children.

Much of the comedic success of "The Middle" comes from the three very different children the Heck's are bringing up. Frankie and Mike's oldest son, Axl is a football and basketball star in high school who is constantly struggling to keep up his grades in order to gain a football scholarship to a local college. Axl is the most popular of the three children, largely because of his athletic ability and believes in trying to get rich quick alongside his friends.

The middle child of the family, Sue is the complete opposite of her elder brother, Axl, and struggles in social situations. Where Axl is lazy and finds it hard to be motivated for anything other than sports, Sue is perpetually happy and optimistic. Sue Heck begins "The Middle" by desperately trying, and failing, to join a school team or group to gain some form of social acceptance.

The final member of the Heck clan is Brick, an obsessive reader who is suffering from some form of learning and social disability which is highlighted by certain ticks. As the show begins, Brick is known for saying a sentence before repeating the final words of the sentence under his breath. Brick struggles to make friends at school and finds it difficult to find links to his family because of his intelligence and obsession with reading.

"The Middle" has a deep heritage within the TV industry as it was created by Eileen Heisler and DeAnne Heline following their successful development of "Roseanne." The legendary pair of TV producers had been in talks about developing another sitcom revolving around a white working-class family the ABC network hoped would match the earlier success of "Roseanne.

Eventually, "The Middle" was launched in 2008 when "Everybody Loves Raymond" actress, Patricia Heaton was attached to the sitcom and a pilot was filmed. Heaton found her way to "The Middle" after completing her most famous early role as Debra Barone on "Everybody Loves Raymond." The move into sitcoms came after Heaton had appeared in feature films, "Beethoven" and "Space Jam" following earlier appearances in the dramedy, "Thirtysomething."

Upon trying to get "The Middle" off the ground, Eileen Heisler and DeAnne Heline brought together two of the best-known faces from U.S. TV from the early 2000s. Neil Flynn had spent much of his early career appearing in small parts in TV shows and movies, such as "The Fugitive" alongside Harrison Ford. Flynn came to the attention of the public for his role of the Janitor in the sitcom, "Scrubs." The cancellation of "Scrubs" came in 2008 just as Flynn was filming the pilot for "The Middle."

The children of the Heck family are given prominent roles in the nine-season run of the sitcom and are played by Charlie McDermott, Eden Sher, and Atticus Shaffer. McDermott has appeared in a number of smaller TV and movie roles including his debut movie performance in M. Night Shyamalan's "The Village." Eden Sher is best-known for playing Sue Heck and voices the Disney character of Star Butterfly in the animated series, "Star vs the Forces of Evil." Atticus Shaffer has become a star for his role of Brick in "The Middle" and has voiced a number of characters in animated movies including his performance as Edgar E. Gore in Tim Burton's "Frankenweenie."

Prior to the casting of Patricia Heaton and Neil Flynn in "The Middle", the producers and showrunners had been seeking to create a show set in the so-called flyover states of the Midwest. The original pilot starred Ricki Lake as Frankie before the plan was abandoned during the 2005-2006 development season. "The Middle" is produced by the Blackie and Blondie production company for Warner Bros. Television and is broadcast on the ABC network. Despite being set in Indiana and base don the real city of Jasper, Indiana, "The Middle" is filmed on the Warner Bros. lot in Burbank, California and set in a fictional town named Orson. Over the nine seasons, the show has used a single-camera setup and attempts to create a sense of realism around the characters through the use of authentic looking sets.

If you are to use the online critics as a guide for choosing a TV show to watch, "The Middle" would be high on the list of sitcoms to watch as it has an average critical review of over seven out of ten. "The Middle" may not have found the large audience of other family-based sitcoms, such as "Modern Family" or "Roseanne", but it did find a consistent audience and has been broadcast in Australia, New Zealand, the U.K., and Brazil. There are many reasons to enjoy the sitcom which hit number six on Metacritic's list of best network TV shows for the 2009-2010 season. The best reviewed seasons according to reviews are the third to fifth with seasons six and seven also achieving higher than averages grades from critics online and in the press.

A spinoff has been discussed following the 2018 completion of the ninth and final season of the show. The spinoff was reported to take place a number of years after the completion of "The Middle" and would feature the character of Sue Heck embarking on life as an adult in Chicago.

The only member of the original cast headed by Ricki Lake during the 2005-2006 development cycle to retain their role was Atticus Shaffer as Brick Heck. Charlie McDermott actually had two auditions for the role of the eldest son of the Heck family before losing out on the chance to play a character then named, Elvis. Most viewers have noticed the unusual walk of Brick Heck, which is not part of the character but the result of a medical condition the actor, Atticus Shaffer is affected by. Shaffer has stage four osteogenesis imperfecta which has left him with brittle bones. 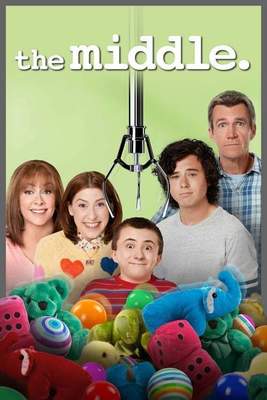 These are Providers which might be available to watch the show.
The official website of this TV-Show can be found here: http://www.abc.go.com/shows/the-middle

* This is a sponsored link / the reviewed TV-Show might not be available with Amazon Prime Video Service / after the 30 days test period Amazon Prime might cause additional costs. The official website of this show can be found here: The Middle
Did you like reading this TV-Show Review? Yes No