Keeping Up with the Kardashians
Ryan Seacrest, Eliot Goldberg
Reality

Keeping Up with the Kardashians - Review

"Keeping Up With The Kardashians" Becomes A Global Reality TV Success

The reality TV juggernaut, "Keeping up with the Kardashian" was created by "American Idol" host Ryan Seacrest after he met the Kardashian family in Los Angeles. The show has been sold around the world and follows the three sisters, Kim, Kourtney, Khloe, and their brother Rob through their lives.

The show opened in 2007 with the focus placed largely on Kim Kardashian who had grown to fame in Hollywood because of her relationship with the singer, RayJay and her friendships with Paris Hilton and Lindsay Lohan. At the time of the opening of the show, the three Kardashian sisters were largely focused on the development of their clothing stores, "Dash."

In the early seasons, Kourtney was romantically linked to her longtime boyfriend, Scott with whom she shares children but the couple ultimately faces the issues caused by an unwillingness to settle down. Km Kardashian is the focus of much of the early drama with her many boyfriends changing throughout the different seasons and much of the drama coming from the fact Kim is growing in fame while her sisters are not. This dynamic changes in later seasons as all three sisters achieve global fame through the show and set out to start various business lines and companies they often market through the different episodes of "Keeping up with the Kardashians."

Often referred to as a "Momager," Kris Jenner Kardashian was the brains behind the reality TV show and features in the early season with her role grew as the story of the family progresses. For the majority of the early seasons, Kris is married to the Olympic decathlon winner, Bruce Jenner who would later go through gender reassignment surgery to become Caitlyn.

Kris shares two children with Caitlyn, Kylie, and Kendall who rarely appear in the early seasons but have become major stars in the later installments of the show. Each episode takes on a similar structure with the family seen in their everyday lifestyle in Hollywood with makeup artists and hairdressers often in attendance. The members of the family are either modeling for a specific brand or launching a new business line but a minor clash with a family member often leads to the relationship between the sisters or other family members being put into doubt. By the end of the show, the unhappiness is usually set aside for the good of the family with a voiceover from one of the family members explaining how important the close relationships they share are to their future happiness.

Kris Jenner is credited with the idea for the show which she shared with Ryan Seacrest when he was looking to launch his own Ryan Seacrest Productions company. Kris Jenner was originally married to the celebrity lawyer, Robert Kardashian with whom she shared her first four children. Kris began managing her daughter Kim's career before "Keeping up with the Kardashians" began screening and has become well-known as a difficult negotiator in Hollywood on behalf of her children.

Ryan Seacrest was one of the few media executives to take the idea of "Keeping up with the Kardashians" seriously when it was pitched by Kris Jenner. Ryan Seacrest Productions has been built on the show and the partnership the reality TV series allowed the company to build with the E! network in the U.S.

Of the three sisters, Kourtney Kardashian has often kept her own children out of the spotlight although her relationship with former partner, Scott was central to the early success of "Keeping up with the Kardashian." Alongside the launching of various retail and clothing lines with her sisters, Kourtney has taken on roles n the spinoff shows, "Kourtney and Chloe take Miami" and "Kourtney and Kim take New York."

The "Keeping up with the Kardashians" franchise was launched when Ryan Seacrest spoke to Kris Jenner and decided to send a camera crew to the family to film a family barbecue. The idea was to get a glimpse into the life of the family and make sure they had enough personality to front an entire hour of reality TV. Seacrest states he watched the footage and immediately fell in love with the family and took the raw footage to the executives at the E! network. Despite many critics believing the show is faked for the cameras, Kim Kardashian has stated she has always felt the family is shown in their true light whether it is good or bad. Seacrest states the show is based on a loving blended family who has some wealth and a few celebrity connections. As the show has progressed, the number of celebrity friends and connections has grown to include rapper and husband of Kim, Kanye West.

The show is filmed in Los Angeles but has traveled the world to bring the latest adventures of the family to viewers wherever they may happen. Each season also sees a family vacation take place with the majority of family members traveling to a high-class resort and spa in a tropical location. A number of spinoffs have also been released, including the "Khloe and Lamar" reality TV show which featured Khloe and ex-husband, NBA basketball star, Lamar Odom.

"Keeping up with the Kardashians" has been a rating hit for E! and has been sold around the world with the record number of viewers in the U.S. being 4.8 million for the season four finale. The show has faced criticism in some quarters for the family being famous simply for being famous and spawning a large reality TV industry. The need of the family to grab some fame and cling on to it has been the major reason for much of the criticism which has remained in place throughout its 16 seasons with the 17th already commissioned. Other critics declared the show to be a guilty pleasure with little seriousness to be found in the adventures of the family over more than a decade.

The Kardashians have fought over who actually came up with the idea for the show as Caitlyn's memoir states she was the one who decided to explore the chances of starring in a reality TV show. Caitlyn's son, Brody had already appeared in other reality TV shows backing the claims of Caitlyn. Despite the show often claiming it is a true representation of the lives of the celebrity family, court documents regarding the divorce of Kim and Kris Humphries stated scenes regarding their engagement and divorce had been reshot due to the demands of Kim. It is unlikely, "Keeping up with the Kardashians" would have achieved its success had it kept its first titles, "Krazy with a K" and "Living Kardashian." 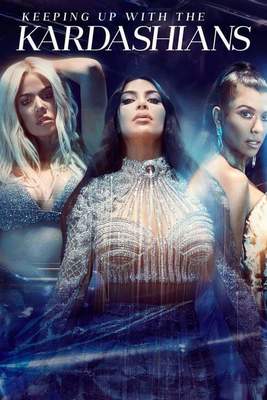 These are Providers which might be available to watch the show.
The official website of this TV-Show can be found here: http://www.eonline.com/shows/kardashians

* This is a sponsored link / the reviewed TV-Show might not be available with Amazon Prime Video Service / after the 30 days test period Amazon Prime might cause additional costs. The official website of this show can be found here: Keeping Up with the Kardashians
Did you like reading this TV-Show Review? Yes No