"It seems today, that all you see is violence in movies and sex on TV," is the opening lyrics to the Family Guy theme song, and while these lyrics might make you think that you're in for some family-friendly comedy, Family Guy is actually designed with adults in mind. This comedy, which is another show that's arisen from the mind of Seth McFarlane, is all about absurdity; the characters are parodies of small town families, and the situations that they get into are often larger-than-life.

Family Guy has been running for just about 20 years, and while it's been canceled at least once, it has become something of a television institution throughout the world. The show follows the exploits of the Griffin family, and since each member of the clan is so different, this enables the writers to explore just about every kind of plot imaginable. Not only are the Griffins packed with such variety, but their family dog, Brian, who can talk, provides his own storylines and unique adventures.

In many cases, the show has a message, but that isn't to say that there aren't multiple episodes where the main driving force behind the plot is just plain hilarity. In any situation, a lot of the comedy in Family Guy is designed to shock the viewer, and just about no topic is verboten, so those with thinner skins might want to avoid the show altogether. While topics aren't quite as controversial as they are in shows like South Park, the writers still aren't afraid to make fun of the majority of topics and groups.

In the end, each show does have a core of morality that is designed to convey a message to the viewer, which is part of the charm of Family Guy. As mentioned, each character has a lot of nuance when it comes to their individual personalities, and each character is allowed to have his or her own episodes that provide a look into their perspective.

One of the most iconic features of Family Guy is the cutaway. In many of the plots, there are frequent pauses that lead to an outrageous joke. In most circumstances, a character will set up one of these quick cutaways by saying something along the lines of, "This reminds me of the time that I…," and then there will be something of a flashback that is always utilized for comic payoff. Every character has had the opportunity to do a cutaway, and the show uses these to give a quick break from the episode's main narrative.

Over the years, Family Guy has greatly affected popular culture, and the show has led to the creation of two spinoffs that include The Cleveland Show and American Dad. Both of these shows feature a heavy attention to the family dynamic of the characters, and both of the shows have tied into Family Guy in one way or another.

Also, the show has performed another major feat: it's had a crossover with The Simpsons, which is the longest-running animated series of all time. This episode, which was titled "The Simpsons Guy," was a hit and finally let viewers see what would happen if the two most famous cartoon families were to meet each other.

When it comes to characters, Family Guy has almost as rich a cast of townsfolk as The Simpsons. Still, if you're looking for the most important to the Family Guy plot, then here are the characters to look out for:

In addition to these integral characters, many celebrities have voiced some of Quahog's other citizens. This includes Star Wars' Carrie Fisher as Angela, who serves as Peter's boss. When she passed away, they even had a funeral for the character. Similarly, Adam West, star of the 1960s Batman series, played the mayor of Quahog. His character always seemed spaced out, but during the plot, he married into the Griffin family, and when he passed, he was honored by the show in a similar manner to Carrie.

This show was created by Seth McFarlane, and it's based on a short that he created called The Life of Larry. Also, many of the Rhode Island locations are based on McFarlane's years studying animation at the Rhode Island School of Design. Overall, if you love irreverent humor, non-politically correct humor, and chaotic cutaways, then Family Guy is a good choice. 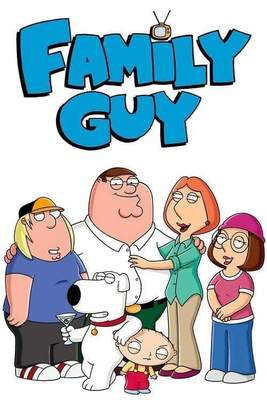 These are Providers which might be available to watch the show.
The official website of this TV-Show can be found here: http://www.fox.com/familyguy/

* This is a sponsored link / the reviewed TV-Show might not be available with Amazon Prime Video Service / after the 30 days test period Amazon Prime might cause additional costs. The official website of this show can be found here: Family Guy
Did you like reading this TV-Show Review? Yes No