"NCIS new Orleans" is a spinoff from the successful CBS network franchise, "NCIS" which was commissioned for a sixth season in early 2019. The show was born after the "NCIS" showrunner, Gary Glasberg who also acted as the showrunner for "NCIS New Orleans" before dying in his sleep in 2016.

The show premiered in 2014 and tells the story of the Naval CIS department office in New Orleans which is headed by the legendary agent, Dwayne Cassius Pride often referred to as "King." The team is responsible for the area of the south from the Mississippi River to the Texas Panhandle where they spend their time investigating the many different crimes involving by Navy and Marine personnel. The team expands over the course of the five already produced seasons when the Jefferson County coroner, Sebastien Lund joins the team as a forensics specialist.

The introduction of the "NCIS New Orleans" team took place in a similar fashion to those of the other "NCIS" spinoffs as a two-part backdoor pilot. The show crossed over to "NCIS" when the iconic Leroy Jethro Gibbs and his team headed to New Orleans to investigate the murder of a local Congressman who was once a Naval Officer and member of the "NCIS" team. Returning to New Orleans, Gibbs is pleased to discover the head of the local field office is his former partner and friend, Dwayne "King" Pride. Gibbs brings another member of his team but is teamed with his ole partner, Pride for the majority of the two-part episode.

As the episode progresses, the partnership between Gibbs and Pride becomes stronger with the two linking the murder of the politician with an old, unsolved case known as the Privileged Killer. The team of "NCIS" and "NCIS New Orleans" agents assemble in a square in the city to discuss the case and are observed by the murderer who takes photos of them from an unseen location. Gibbs and Pride are shocked to discover another victim of the killer has been discovered in the Louisiana Wetlands where he has spilled jet fuel during the murder.

The second victim is identified as Agent Doyle, an "NCIS" member who has close links to Congressman McLane and prompts the team to take a closer look at the life of the politician. Eventually, the net begins to close on a single suspect who the team must catch before another member of the "NCIS" team is murdered by pooling their talents and looking for the rest of the clues.

The cast of "NCIS New Orleans" is headed by Scott Bakula, who is well-known for his role as Sam Beckett in "Quantum Leap." Prior to "Quantum Leap," Bakula had spent much of his career working in short-lived TV shows and off-Broadway plays before starring with Dean Stockwell in the science fiction series. Since "Quantum Leap" aired, the career of Scott Bakula has seen him take on roles in the "Star Trek" franchise and the Matt Damon-starring movie, "The Informant."

Among the other members of the cast of "NCIS New Orleans" is Zoe McLellan who had a role in the Donald Bellasario produced "JAG" which was the forerunner to the "NCIS" franchise. Among the other productions, McLellan has been involved in are "HOuse" and the recent ANC-produced show, "Designated Survivor."

The production of "NCIS New Orleans" differs from the other installments of the "NCIS" franchise as it is filmed on location in the city of New Orleans. This is different to the usual way the franchise is produced with filming usually located in California but the showrunner, Gary Glasberg believed the individual nature of New Orleans called for filming to take place in Louisiana. Glasberg was the showrunner of the show until his untimely death at the end of the third season, which prompted his replacement with Brad Kern. The showrunner was later replaced as he was accused of inappropriate behavior toward female staff members.

After the backdoor pilot of "NCIS New Orleans" was seen as a success by CBS Network executives, the first season was filmed and broadcast to an average of just over 17 million viewers. Following seasons of the show have seen a steady decline in ratings but the show has remained popular with viewers and has yet to fall below an average of ten million viewers per episode for any season.

Overall, the show has a mixed but positive series of reviews with Rotten Tomatoes providing the show with a rating of 65 percent for its opening season and Metacritic provides a rating of 56 percent. The majority of professional critics were full of praise for the casting of Scott Bakula as the lead investigator in "NCIS New Orleans" as he has been described as the most likable leading man on TV. The shift in tone and location was also praised by many as providing a new way of looking at the "NCIS" franchise which separated the show from its many forebears in the series.

Overall, "NCIS New Orleans" has been a success for CBS and has been sold to various territories around the world, including Australia and parts of Europe. The international success of the show has been tempered by some controversy over the handling of the names and international status of some of the nations from the former Eastern Bloc. Some criticism has come from Russia over the status of some states within the nation of Georgia which have not been recognized for their independence.

As the series has progressed one of the most controversial aspects of the production was the accent undertaken by Scott Bakula in the early episodes. As the first season progressed, the accent was scaled back to make it less stereotypical of a Louisiana voice. "NCIS New Orleans" was a success in the first days it was released but did not reveal everything about its characters at the start of the first season with details of their histories slowly being released. 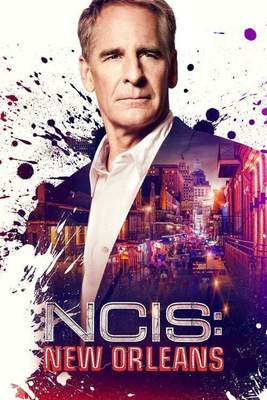 These are Providers which might be available to watch the show.
The official website of this TV-Show can be found here: http://www.cbs.com/shows/ncis-new-orleans/

* This is a sponsored link / the reviewed TV-Show might not be available with Amazon Prime Video Service / after the 30 days test period Amazon Prime might cause additional costs. The official website of this show can be found here: NCIS: New Orleans
Did you like reading this TV-Show Review? Yes No