The Fox network brought "Bones" to the TV screens of the U.S. in 2005 when the pilot aired and began a 22-part first season. The show is loosely based on the novels and life story of a forensic scientist and author, Kathy Reichs who acts as an executive producer on the show. The show itself was created by Hart Hanson and ran for 12 seasons airing its conclusion in 2017 with Emily Deschanel and David Boreanaz playing the main roles.

"Bones" begins with the pilot episode which brings the character of Dr. Temperance "Bones" Brennan to the small screen with the show detailing the characters love of forensic science and writing as a published novelist. The show begins with Dr. Brennan returning to the U.S. from a trip to Guatemala where she was helping to identify the victims of genocide. Passing through airport security in Washington D.C., "Bones" is stopped by a security officer who she wrestles to the ground as he is unaware of her role as a forensic scientist.

Once arrested by the airport security staff, "Bones" is held in a room where she meets FNI Special Agent Seeley Booth who asks for her help in a series of murder cases he is investigating. "Bones" is reluctant to help Booth and wants to simply return to her lab at the Jeffersonian Institute and be on with her research. Eventually, "Bones" agrees to help Booth with a case in return for her freedom, in return for her help, "Bones," asks for a full role in the investigation.

Booth is investigating the discovery of a body at the bottom of a lake which a little research by the team at the lab reveals has been in the water for around two years. Among the team headed by "Bones" is her best friend and forensic artist, Angela Montenegro who spends the episode building a 3-D image of the reconstructed face of the deceased person. The victim is seen to be between 18 and 22 and soon identified as a Congressional intern, Cleo Louie Eller who was said to have had an affair with a congressional senator while having a boyfriend, the Senator's aide Ken Thompson. Eller also had a stalker but Booth is convinced of the guilt of the Senator without first conducting a complete investigation. Booth and "Bones" begin to have their first discussions about the need for scientific research with Booth arguing the case for faith and instinct.

Over the course of the show, the series tends to take the murder of the week approach with a light-hearted approach to the dialog taken to make sure the dark themes are not overpowering for a show exploring the darker side of life. "Bones" and Booth take different approaches to their careers and the investigations they undertake with Brennan being a full partner to Booth throughout the different seasons. Much of the comedy used to lighten what could be a darkly-themed show comes from the misconceptions Booth and "Bones have about each other. A recurring joke sees a popular culture reference made by one of the characters to which "Bones" has no idea of its existence.

Showrunner Hart Hanson has a long history in TV as a writer following the completion of his education at the University of British Columbia where he also taught after completing his MFA. Hanson began his writing career as a TV scribe who worked on various shows such as "Neon Rider" and "Street Legal" before getting his big break with an episode of "The Outer Limits." Hanson would go on to work on major TV hits such as "Judging Amy" and "Stargate-SG1" before Fox approached him about creating a forensics-based police procedural.

The role of Dr. Temperance "Bones" Brennan is played by Emily Deschanel who came to the series after being named one of the six actresses to watch in 2004 by "Interview" magazine. Prior to her role in "Bones," Deschanel had been working steadily with supporting roles in movies including "Cold Mountain" and "Glory Road." A committed vegan, Deschanel has recently been seen in the role of Angela on the TNT drama, "Animal Kingdom."

Often playing the hero on TV, David Boreanaz plays FBI Special Agent Seeley Booth to continue his run of hit shows stretching back to "Buffy The Vampire Slayer" in 1997. Boreanaz found early fame as the vampire, Angel on "Buffy The Vampire Slayer" and its spinoff "Angel" which saw him take the lead on a primetime TV show for the first time. As "Bones" came to a close in 2017, Boreanaz jumped straight into his latest role as Jason Hayes in the CBS series, "SEAL Team."

Hart Hanson was originally unsure of taking part in "Bones" as he was not comfortable working full-time on a police procedural. Hanson was asked to take part in the show by Fox when the idea was still to create a documentary about the life and works of "Bones" author, Kathy Reichs. The show evolved as a way of merging the real-life Reichs and the fictional character of Brennan found in her novels. One of the conditions for Hanson when he finally agreed to write the pilot and act as showrunner was the consistent involvement of Reichs as a creative consultant.

Upon its premiere on the Fox network in the U.S., "Bones" received largely positive reviews with the chemistry of the two lead characters praised by critics who found it largely entertaining. The addition of the romantic aspect of the relationship between Booth and "Bones" was seen as elevating the show far above the usual police procedurals which had already been produced with a forensics angle. The Rotten Tomatoes review site gives the show a rating of 90 percent overall and 83 percent based on viewer reviews. "Bones" ran for 12 full seasons before its cancellation by Fox in 2017 with the rights to stream the show held by Hulu and Amazon Prime.

"Bones" actress Emily Deschanel has a famous sister, Zooey who found fame as an actress in the movie "Elf" and the sitcom, "New Girl." Zooey Deschanel appeared in a season five episode of "Bones." One of the most famous storylines on the show was the move of actor T.J. Thyne who played Jack into a wheelchair when he was injured in a bomb attack. Thyne is said to have remained in character throughout the working day, refusing to walk so he would be ready for his next scenes. Hart Hanson and his team of writers were often unsure of the future of the show and would write different season finale's to ensure the series could come to a proper conclusion if canceled. 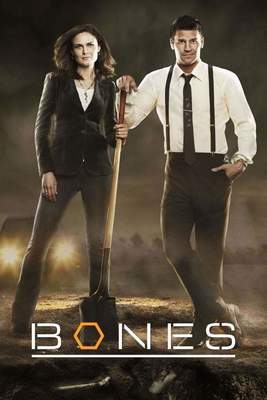 These are Providers which might be available to watch the show.
The official website of this TV-Show can be found here: http://www.fox.com/bones

* This is a sponsored link / the reviewed TV-Show might not be available with Amazon Prime Video Service / after the 30 days test period Amazon Prime might cause additional costs. The official website of this show can be found here: Bones
Did you like reading this TV-Show Review? Yes No