"Silicon Valley" Takes A Comedic Look At The Technology Sector

"Beavis and Butthead" and "King of the Hill" creator Mike Judge created his latest workplace comedy, "Silicon Valley" alongside his regular collaborators, John Altschuler and Dave Krinsky in 2014. The show was created under the theme of those with the ability to create are not always able to lead.

"Silicon Valley begins with a group of programmers and app developers living together in a house in Silicon Valley while working for the vast corporation, Hooli. The group is part of an innovation incubator run by an entrepreneur, Erlich who has made a fortune creating various apps and pieces of software but who has little time or patience with those living within his incubator. Erlich is more interested in the benefits he has found from his wealth, which includes the ability to party as much as he wants and access to beautiful women.

One of the residents of the incubator program, Richard Hendricks has been working on an app for some time and begins the pilot episode, "Minimum Viable Product" feeling he has finally reached the stage to pitch his idea. Richard has created his own company, Pied Piper which involves many of those who live in the incubator program house as partners and employees. Erlich himself owns five percent without ever contributing to the output of the tech startup.

Richard eventually decides the time has come to reach out to potential investors he feels could assist with the launch of Pied Piper and its copyright infringement app. Richard begins his search for funding by finding the venture capitalist, Peter Gegry and trying to pitch his idea. The awkward and confidence lacking Richard is quickly dismissed by Gregory as not having the skills or ability to run a company and develop an app with little commercial prospects. As he discusses the app with his colleagues at Hooli, Richard is dismissed by them as not having a sound idea or business plan. However, Richard's rival, Donald informs the CEO of Hooli, Gavin Belson of the app and the new algorithm for compressing data. Belson realizes the algorithm is worth far more then the app Richard is developing and could push Hooli even higher up the rankings of tech companies.

The assistant of Peter Gregory, Monica is intrigued by the app and algorithm developed by Richard and allows him to pitch his idea to her when he is not as stressed. Monica informs Gregory of the algorithm and convinces him to take a small share in Pied Piper and let Richard grow the company organically. Eventually, Hooli's CEO offers Richard $10 million to purchase Pied Piper and Gregory offers $200,000 for a five percent share. Monica explains the key role the algorithm developed by Richard is playing in the negotiations to him and explains Gregory will leave he and his fellow Pied Piper developers alone to develop the algorithm successfully. She also explains Hooli will close Pied Piper and take the algorithm to reveal to the world as their own. The success of his work leaves Richard so shocked he has a panic attack and heads for a local hospital without giving an answer about the fate of Pied Piper.

Mike Judge is the creator and showrunner of "Silicon Valley" alongside his fellow writers, John Altschuler, and Dave Krinsky. Mike Judge has been a writer and director for TV and film since 1989 when he began making short films for the Comedy Central network. The director found his first burst of fame and notoriety when he developed the characters of "Beavis and Butthead" for the MTV network. He went on to create the animated series, "King of the Hill" before he began exploring workplace comedy in the movie, "Office Space."

Canadian-born Thomas Middleditch had the role of Richard written specifically for him by Mike Judge after coming to the attention of the filmmaker when he pitched an animated series to the "King of the Hill" creator. Middleditch began his career in a McDonald's chicken nuggets commercial before working as a standup comedian and writer. His acting work included roles in a number of U.S. TV pilots not picked up for full seasons.

Although he is best known for his comedic roles and performances as a standup comedian, T.J. Miller has toured the world studying acting in various styles. Not only did he study circus performance in Paris, France, he also spent some time living in the U.K. capital of London studying Shakespeare. Miller appears in "Silicon Valley" as Erlich and has appeared in movies such as "Christmas Party" and "Cloverfield."

"Silicon Valley" is filmed in California for the HBO network alongside 3 Arts Entertainment and Je=udgemental Films. Mike Judge had developed the idea for "Silicon Valley" after a few different meetings with tech startups regarding film and TV work and his own experiences. The writer worked in Silicon Valley after completing his studies at college and lasted less than three months as he felt the corporate culture of the region did not suit him. The "Beavis and Butthead" creator has stated many of the characters are based on people he met when attending meetings with companies attempting to work with him on Internet-based animation projects.

"Silicon Valley" is certainly worth watching for those looking for a workplace-based comedy or with an interest in technology. However, many reviewers have stated the overall comedy of the HBO production could lead to a wider audience enjoying much of the comedy coming from the workplace relationships of the characters. The Rotten Tomatoes website gives "Silicon Valley" a rating of 95 percent for the first season, a rating it retains across the first four seasons. The fifth season sees something of a dip in critical ratings but the 89 percent rating is still seen as impressive for a show spanning 46 completed episodes. A sixth season of "Silicon Valley" is planned but was delayed in 2019.

Mike Judge had been looking to finance a feature film following the cult success of his comedy, "Office Space" but found his best chance of creating a new comedy with HBO's sitcom format. The only condition placed on Mike Judge was to include more women in the show which would become "Silicon Valley" but HBO was shocked when the first pilot contained a story about two women arriving in California looking to marry a tech billionaire. Thomas Middleditch was locked into the role of Richard early in preproduction but the audition process saw almost every male actor cast arrive at their audition looking to play the charismatic Erlich. 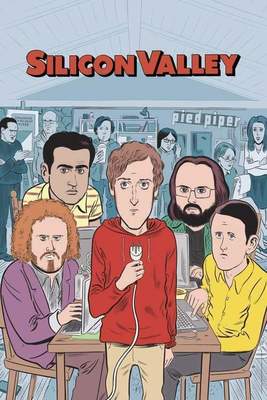 These are Providers which might be available to watch the show.
The official website of this TV-Show can be found here: http://www.hbo.com/silicon-valley

* This is a sponsored link / the reviewed TV-Show might not be available with Amazon Prime Video Service / after the 30 days test period Amazon Prime might cause additional costs. The official website of this show can be found here: Silicon Valley
Did you like reading this TV-Show Review? Yes No