"Law And Order: Special Victims Unit," sometimes known simply as "SVU" is a police procedural drama developed by Dick Wolff and associated with his popular, "Law And Order" franchise. Wolff had been obsessed by the true-life murder case known as the Preppie Case" which was used as the basis for a season one episode of "Law and Order" titled, "Kiss The Girls And Make Them Die." The writer did not believe he had the time to explore the darker aspects of the case or how these events affect the officers investigating them.

Broadcast by NBC in 1999, the first episode of "Law and Order: Special Victims Unit" was given the title, "Payback" and revolves around the murder of a cab driver in New York City. The members of SVU are initially confused about why they have been called in as the murder does not appear to have any sexual motives. Detectives Olivia Benson and Elliot Stabler are given the case when they are told the genitals of the cab driver have been removed during the murder.

The license for the cab is in the name of Victor Spicer, but he is in jail after being convicted of male prostitution and claims he sold his license to an unnamed man. Eventually, Interpol returns the identity of the deceased man as Stefan Tanzic, a former Serbian soldier who was wanted for a range of crimes, including the rape of tens of women and ethnic cleansing. At this point, Benson and Stabler begin to take the case a little more seriously and look for those women who were raped who have made their way to New York. Five women in total are living in New York and accused the former soldier of rape.

After finding the five women, one is out of town but two do not have substantial alibies and prompt the suspicion of the detectives. The pilot episode brings together the iconic duo of Benson and Stabler and gives the viewer a glimpse into the characteristics which the duo have become associated with. Benson is a child of a rape victim who has joined the "Special Victims Unit" to make sure the problems of her own life are not continued in the future for others. Plot lines for "Special Victims Unit" follow much of the same path as the original "Law and Order" series which saw many stories taken from real-life news events.

Dick Wolff has been a staple of U.S. TV for many years and has produced four versions of the successful, "Law and Order" franchise which he began in 1990. Wolff was originally an advertising copywriter who had dreams of making his way to Hollywood to work in movies. His early screenwriting credits include the 1988 movie, "Masquerade" starring Rob Lowe and Jennifer Tilly.

After finding early success with his film scripts, Wolff became a writer for the award-winning TV police drama, "Hill Street Blues." Wolff has taken the police/courtroom procedural drama franchise around the world with the now-canceled "Law and Order: UK" series finding some early success. Wolff's "Law and Order" series was the longest-running non-animated series on U.S. primetime TV before "Law and Order: Special Victims Unit" took its crown when it was commissioned for a 21st-season in 2019.

The actress, Mariska Hargitay is the best-known member of the "Law and Order: Special Victims Unit" team for her role as Detective Olivia Benson. After playing the role of the investigator for all 21 seasons of the show, Hargitay created the Joyful Heart Foundation to provide support for women affected by rape. The actress had been working in Hollywood since the mid-1980s in movies and TV shows, including "Ellen" and "Freddy's Nightmares: A Nightmare on Elm Street - The Series" before winning the role of Benson in 1999.

Emmy Award nominee, Christopher Meloni won the role of Detective Eliot Stabler in 1999 when he had already made a name for himself on the critically-acclaimed HBO series, "Oz." The actor has appeared in a number of comedy movies including, "Wet Hot American Summer" and the "Harold and Kumar" franchise while appearing in "Law and Order: Special Victims Unit." Meloni now stars in and produces the comic book adaptation, "Happy!"

"Law and Order: Special Victims Unit" is produced by Dick Wolff Films for the NBC network in the U.S. The first three seasons were co-produced by Studio USA before the company went into liquidation leading to NBC and Universal Studios have been involved in the production over the course of its run in production. The show is now entering its 21st season in production which will make it the longest-running non-animated show in the history of U.S. TV.

The filming of the show caused some issues for NBC and Dick Wolff as he felt the show should remain true to its New York City roots. Wolff wanted to use real locations in New York for exterior shots and sought out a studio space in New York for interior shots. The production eventually used the NBC Archives in New Jersey which had been emptied and sat empty for decades before Wolff discovered the space and convinced the network to let him use the building as a studio. In 2010, the cancellation of "Law and Order" led to studio space in New York's Chelsea Piers becoming available and allowing the production to move to The Big Apple.

To ensure the first episode of "Law and Order: Special Victims Unit" was a success, Dick Wolff called in his main collaborator in the shape of director, Jean de Segonzac. The American director works in both documentaries and TV shows with his gritty visual style praised by Wolff on many occasions.

Over the course of the 21 commissioned seasons of "Law and Order: Special Victims Unit," the show has been a rating hit with largely positive critical reviews. The first season of the show was the first to break the traditional curse of cancellations for shows aired on a Friday night in the U.S. The average number of viewers hit more than 18 million for the first season with a gradual decline over the last few seasons due to the changing face of television.

The critics have been mostly kind to "Law and Order: Special Victims Unit" particularly for the first few seasons when the chemistry between the lead actors was praised by the majority of critics. TV Guide gives the show a rating of 66 percent while TV.com gives the police/courtroom drama a rating of 8.9.

Mariska Hargitay is the daughter of the 1950s and 60s actress, Jayne Mansfield and was asleep in the back of the car which crashed causing the death of her mother. During the development phase of "Law and Order: Special Victims Unit," Dick Wolff gave the show the title, "Sex Crimes" but later changed it when NBC explained the title would be difficult for them to market. The actor and rapper, Ice-T has played the character of Fin since season two but he was initially offered the role on a short-term basis. Ice-T was supposed to stand in for just four episodes when another actor left the show unexpectedly but he bonded so well with the rest of the cast he was offered the role on a full-time basis. 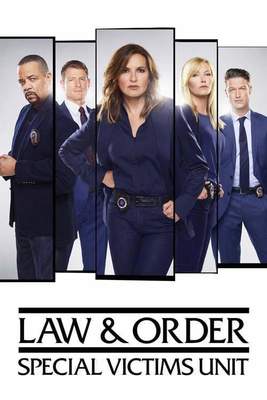 These are Providers which might be available to watch the show.
The official website of this TV-Show can be found here: http://www.nbc.com/law-and-order-special-victims-unit

* This is a sponsored link / the reviewed TV-Show might not be available with Amazon Prime Video Service / after the 30 days test period Amazon Prime might cause additional costs. The official website of this show can be found here: Law & Order: Special Victims Unit
Did you like reading this TV-Show Review? Yes No