"The Umbrella Academy" moves from Comic Book to the TV Screen

"The Umbrella Academy" was developed by showrunner Steve Blackman and writer Jeremy Slater from a comic book of the same name by Gerard Way and Gabriel Ba. Eventually, the show was developed for the Netflix streaming platform after being trapped in development limbo for almost a decade.

The series revolves around a fictional family of adopted children who has grown to adulthood and share a range of superpowers. Episode one begins in 1989 with a group of 43 women around the world going into labor and giving birth despite showing no signs of pregnancy. Of the 43 children born in mysterious circumstances, seven are adopted by the mysterious figure of Sir Reginald Hargreeves who hopes to raise the seven as a team of superheroes.

Flashing forward to the present day, the proposed group of superheroes have dispersed and set off to lead their own lives with little contact between the majority of them. News spreads through the seven of the death of Sir Reginald and leads to a strained family reunion at the funeral. Eventually, six of the seven arrive for the funeral including Ben, Luther, Diego, Klaus, Allison, and Vanya who have been named by their nanny after Sir Reginald originally gave each a number of from one to seven.

As the group reunites and attempt to make sense of their mysterious birth and the reasons why they have been blessed with superpowers, the mysterious Number Five arrives having disappeared fifteen years earlier. Number Five brings a warning of a coming apocalypse which is imminent and must be battled by the group of reluctant superheroes if the world is to continue and the apocalypse be averted.

The return of Number Five with his dire warnings of the coming apocalypse prompt Luther to consider the possibility of Sir Reginald being murdered. Ben discovers a tracker in his arm after an attempt is made on his life which leads to the group slowly coming together to investigate the many strands of the mystery unfolding over the course of season one. The group of potential superheroes must look to explore their own history and future while seeking answers to the many mysteries they are faced with after the arrival of Number Five.

The career of showrunner, Steve Blackman did not take the traditional route for a TV writer. Instead, Blackman studied as a lawyer in his native Canada, passing the bar exam in 1998. After a brief stint as a divorce lawyer, Blackman began writing about his experiences in a script which would eventually become, "The Associates," Blackman continued his writing career with roles as writer and producer on the successful "Bones" and critically-acclaimed "Fargo." After serving as showrunner on "Legion" and Amazon's "Altered Carbon", Blackman was given the role of showrunner for "The Umbrella Academy" for which he also serves as a writer.

The cast is headed by Canadian-born actress Ellen Page, who made her breakthrough on the global stage in the movie, "Juno." Page had been working as a child and adult actor in Canada and the U.S. throughout the late-90s before appearing in a series of movies which built her reputation among critics and audiences alike. Over her career, Page has been nominated for a string of prestigious awards, including the Academy Award, BAFTA, and Golden Globe. She has appeared in a string of popular movies, including "Whip It" and "Inception."

Tom Hopper takes on the role of Luther Hargreeves in "The Umbrella Academy" after a short career which has seen him appear in a string of critically-acclaimed TV shows. Hopper began his career on stage in a London staging of Shakespeare's "As You Like It" before taking on a series of roles on British TV. His casting as Sir Percival in the "Merlin" TV show brought Hopper to the attention of fans around the world and led to other roles in "Game of Thrones" and "Black Sails."

Also appearing in "The Umbrella Academy" is Mary J. Blige who plays the ruthless assassin, Cha-Cha. The Grammy Award-winning singer has made a successful move into acting following her appearance in 2017's "Mudbound." Not only was she nominated for writing a song for the soundtrack to "Mudbound" but Mary J. Blige also received an Academy-Award nomination as Best Supporting Actress in the same film.

"The Umbrella Academy" was originally optioned by Universal Studios in 2010 in the hope of developing a movie to ride the wave of comic book adaptations led by Marvel Studios. After numerous scripts were developed and writers attached, the TV show was developed in 2015 by Universal Cable Productions and distributed by Netflix.

The Canadian influence on the show is easy to see with showrunner Steve Blackman and star Ellen Page returning to their home nation to film the show in Canada. Original comic book authors, Gabriel Ba, and Gerard Way act as executive producers on the series which also films at various locations around the nation of Canada.

The series has been positively reviewed but not without some negative responses to its dark themes often seen as clashing with the cinematic visuals of the TV show. "The Umbrella Academy" is certainly worth exploring for comic book fans and those who are fans of the recent spate of superhero movies. In terms of viewers, "The Umbrella Academy" is a global success with more than 45 million Netflix subscribers around the world streaming the show during the first month of its release. Renewed for season two by Netflix, "The Umbrella Academy" is now being compared to better-known superhero groups including "The X-Men" and the recently released HBO adaptation of "Watchmen."

"The Umbrella Academy" was born in the mind of "My Chemical Romance" rock star, Gerard Way, who had attended art school in New York and dreamed of creating his own comic book. Creating "The Umbrella Academy" came after the release of the first two albums from the band and came with a deal for two series of comic books with Dark Horse Comics. It remains to be seen how closely the TV show will follow the three series of comic books which take place in an alternate universe where President John F. Kennedy was not assassinated and appears in the comics. 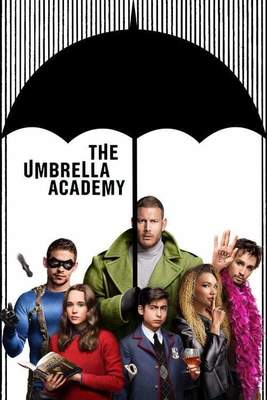 These are Providers which might be available to watch the show.
The official website of this TV-Show can be found here: https://www.netflix.com/title/80186863

* This is a sponsored link / the reviewed TV-Show might not be available with Amazon Prime Video Service / after the 30 days test period Amazon Prime might cause additional costs. The official website of this show can be found here: The Umbrella Academy
Did you like reading this TV-Show Review? Yes No