Fresh Off the Boat - Review

"Fresh off the Boat" Brings Asian Culture To Mainstream TV

"Fresh off the Boat" is an American sitcom detailing the arrival of a family of Taiwanese ancestry in Orlando where they open a steakhouse. The show was created by Nahnatchka Khan and was taken from the memoir of the same name by Eddie Huang.

"Fresh off the Boat" begins in 1995 with the Huang family driving from Washington D.C. to Orlando, Florida where they are hoping to start a new life. The problem facing the members of the family is they have lived all their time in the U.S. alongside other members of the Taiwanese community with the parents, Louis and Jessica failing to assimilate into the traditional American way of life.

The characters are introduced as they drive to Orlando with Eddie sitting in the rear of the family car listening to rap music on his headphones. As he is listening to music, Eddie notices the other members of his family including brothers, Evan and Emery are singing a song together. Eddie removes his headphones and is annoyed by their choice of music before his father explains they must all make an effort to enjoy their change of lifestyle despite any misgivings. Eddie claims he does not want to move away from Washington D.C. and Jessica explains she is having second thoughts about the chances of success of their steakhouse.

Louis refuses to listen to their complaints and reveals he is looking forward to the move and becoming a major part of the community of Orlando. Eddie explains his only reason for looking forward to the move is the chance to meet his idol, basketball star Shaquille O'Neal. Jessica criticizes Eddie for failing to embrace his own culture in the same way he does the African-American culture he appears to love.

As the family arrives at their new home in Orlando, they face a whole host of new neighbors led by the racist Diedre who belittles Jessica as they are introduced. Despite the next day being a Wednesday, the children are sent to school because Jessica believes they should not miss a day of school and get to college as quickly as possible. Eddie faces the problem of who to sit with at lunchtime and appears to have made a friend in the form of Brock, whom Eddie ditches his lunch companion Walter for. Brock seems to be happy to make friends with Eddie until he pulls out a can of mealworms and begins to eat them in front of Brock and his friends. Eddie is immediately ostracized from the table and tries to return to Walter who turns his back on him.

Louis feels the Cattleman's Ranch Steakhouse will be more of a success if the host who greets customers is white and promptly sets out to employ some front of house staff to make his dream a reality. Upon returning home, Evan and Emery explain how wonderful their first day is as they have made friends and gained a girlfriend in a single school day. Last off the bus is Eddie who tells his mother he is miserable and wants to return to Washington D.C.

"Fresh off the Boat" was developed for TV by showrunner Nahnatchka Khan who had earlier worked on "Malcolm in the Middle" and "American Dad!" Khan was born in Iran before her family emigrated to the U.S. and now has a development deal with 20th Century Fox to develop, write, and direct future projects outside of her role with "Fresh off the Boat."

The roles of Louis and Jessica Huang have been given to two of the best-known Asian_american actors in the U.S. Randall Park is a popular comedian and actor who plays the role of Louis and has recently been seen in both the Marvel and DC Comics Cinematic Universe's. Constance Wu began her career acting in U.S. soap operas, such as "One Life to Live" and TV shows such as "Torchwood," and "Law and Order."

The path from page to screen was not a smooth one for Eddie Huang and his memoir which he felt had the opportunity to provide a real-life glimpse into the lives of Asian-Americans. "Fresh off the Boat" had been through a number of name changes, including the title, "Far East Orlando" which Huang found offensive. Throughout the development of the show and its pilot which was made in 2014, the writer was active on Twitter expressing his regret the real-life events of his memoir had been removed from the sitcom in favor of a traditional sitcom format. In reality, the Huang family had seen their grandfather kill himself and the children were often subject to checks by social services because of a lack of understanding of Taiwanese culture.

The critics have been particularly kind to the actors of "Fresh off the Boat" with Rotten Tomatoes giving the show an aggregate rating of 91 percent. The show has been acclaimed by many for its heart and moral center but has faced some criticism for the often stereotypical nature of many of the jokes. Despite leaving the show at the end of season one, the real-life Eddie Huang admits "Fresh off the Boat" has the chance to raise the profile of Asian-American actors and performers.

When "Fresh off the Boat" was picked up for a sixth season by ABC, fans were shocked at a Tweet from Constance Wu expressed her unhappiness at filming another season. We would later explain her unhappiness was not at the show returning but at not being able to take another more challenging role she had been offered. Randall Park has explained his feelings about playing Louis Huang were mixed at first as he feared members of his own Korean-American community would turn against him for taking the role of a Taiwanese-American. 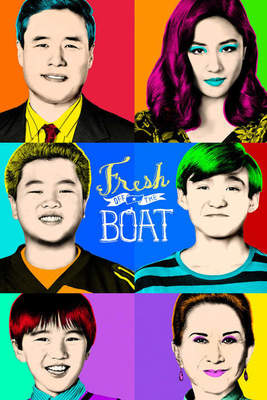 These are Providers which might be available to watch the show.
The official website of this TV-Show can be found here: http://abc.go.com/shows/fresh-off-the-boat

* This is a sponsored link / the reviewed TV-Show might not be available with Amazon Prime Video Service / after the 30 days test period Amazon Prime might cause additional costs. The official website of this show can be found here: Fresh Off the Boat
Did you like reading this TV-Show Review? Yes No

Fresh Off the Boat

The Daily Show with Trevor Noah