In the 21st-century, the handling of the recent war on terror is a difficult subject which can lead TV writers down different paths. The David Boreanaz-starring, "SEAL Team" takes a jingoistic approach to the activities of one of the world's leading special forces team. At times, the series created by Benjamin Cavell touches on difficult subjects regarding how we handle the issues of terrorism in the social media-driven age we live in.

"SEAL Team" opens with the focus squarely on the character of Master Chief Jason Hayes, better known simply as "Bravo." Jason is a military veteran who has been struggling to cope with the long history of fighting for the U.S. in the war on terror, which led to the loss of one of his best friends in an Afghanistan-based attack by local insurgents. The U.S. Navy is requiring Jason to attend therapy sessions to ensure he remains fit for duty and is not restricted from working with his squad of Navy SEAL.

Despite the lies he tells his therapist, it is clear Jason is struggling with the effects of post-traumatic stress disorder and could be a liability to the team he is currently training. The focus of "SEAL Team" is not only on the military aspects of the lives of each member of Bravo team, which are affected by the life they have all chosen to lead in the military. Since the traumatic experiences, he witnessed during his time in Afghanistan with the Navy SEALs, Jason has become estranged from his wife and children who he avoids seeing the majority of the time.

The first season opens with Bravo team suddenly bumped to operational status despite still training with Jason because of an ambush attack killing an already established SEAL team. Soon after they are told of their newly active status, Bravo team are activated when a young western journalist is kidnapped by locals. The team is followed as they prepare to go into action and rescue the journalist with their discussions mirroring many of the thoughts the public has during such events. Knowing the media-savvy nature of its audience, "SEAL Team" has the members of the group discuss the reasons why they were dispatched so quickly, including the photogenic nature of the victim.

As the season's progress, the question of who was responsible for the ambush causing the deaths of the Echo SEAL team, Bravo company replaced begins to play a large part in the plot. Jason and his impressive force of men and women begin to investigate the deaths of the comrades with the Master Chief seeming to see the loss of Echo team as a chance he cannot miss to make up for earlier losses. The battle against ISIS features heavily in the missions undertaken by Bravo team as they are tasked with finding and arresting a leading member of the terrorist organization and bringing them to justice in the U.S.

"SEAL Team" joins an impressive history of military-based TV shows created and developed in the U.S. The series was created by Benjamin Cavell, who was teamed with a number of experienced Executive producers to ensure the smooth development of the show for CBS. Among the industry veterans involved in "SEAL Team" is John Glenn who acted as showrunner for the series. Glenn has worked for every major U.S. network and began his career writing scripts for Walt Disney Productions. Veteran TV producer and director, Christopher Chulack also works as a consultant and executive producer for "SEAL Team" following his work on prestigious shows, such as "ER" and "Southland."

David Boreanaz is the star of "SEAL team" and marked his first starring TV role since leaving the ratings and critical success of "Bones." Boreanaz began his career in Hollywood working as an extra before he won a small speaking role in "Married... With Children." Gaining his first professional role as an actor led to his role as Angel in the acclaimed "Buffy the Vampire Slayer" ad his own spinoff series, "Angel." Boreanaz appeared in a number of feature films before finding success in the Fox crime series, "Bones" alongside Emily Deschanel from 205 to 2017.

Playing the CIA liaison officer Amanda Ellis is former "Mad Men" actress Jessica Pare who is best remembered as Megan Draper in the AMC show. The Canadian actress has been working in her home nation and the U.S. since appearing in "The Babysitter's Club" in 1990 and had a large role in "HotTub Time Machine" alongside John Cusack in 2010.

The first season of "SEAL Team" was developed over a relatively short period after it was created by Benjamin Cavell, who was originally announced as showrunner for the military-based series. Cavell would eventually depart from his role and be replaced by writer and director John Glenn. The show also went through a series of changes in the cast after it was first announced "The Thin Red Line" actor Jim Caviezel would take the leading role of the Master Chief. The change in showrunner came with a change in lead actor with David Boreanaz taking the role of the Master Chief just two months later. The pilot was shot for CBS Television Studios in New Orleans followed by a series of location shoots including time spent filming in Puerto Rico for season two.

The reviews for "SEAL Team" have been mixed with many reviewers of the first season pointing to the solid performances of the lead actors, particularly Boreanaz. Online review sites, such as Rotten Tomatoes score the first season with an average of 70 percent favorable reviews. Metacritic is much tougher with an average just over 50 percent with season two generally regarded as having a higher level of success than the first. Overall, "SEAL Team" has a review rating on Rotten Tomatoes of 82 percent.

"SEAL Team" has tried to support the military veterans of the U.S. by employing around 75 veterans to fill background and stunt roles on the show. The series tries to provide the viewer with a realistic view of active military service by using real terms and accurate equipment for members of Bravo team. A good example of the use of real terms is that of a kinetic op, a term used by SEAL teams for a lethal operation. 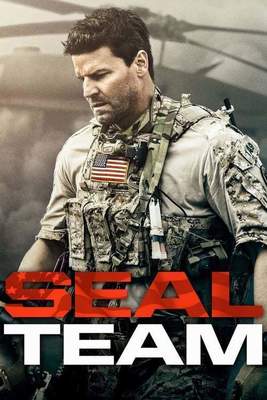 These are Providers which might be available to watch the show.
The official website of this TV-Show can be found here: http://www.cbs.com/shows/seal-team/

* This is a sponsored link / the reviewed TV-Show might not be available with Amazon Prime Video Service / after the 30 days test period Amazon Prime might cause additional costs. The official website of this show can be found here: SEAL Team
Did you like reading this TV-Show Review? Yes No