How the Orville Brought Trek Back to Broadcast TV

For many, the years between 1987 and 2001 were something of a golden period because, during this span of time, viewers were treated to an uninterrupted view of the 24th century via a series of Star Trek shows. This heyday of Trek spanned from Star Trek: The Next Generation to Star Trek Voyager, and while Star Trek: Enterprise followed Voyager in the same year, the fact that the series was set almost 200 years before earned it something of a lukewarm reaction from fans. Fast-forward almost 20 years after the end of Voyager and The Orville premiered. While this series wasn't "official" Trek, it has a feel to it that very much revels in the aesthetic of the 24th-century series.

The show features a somewhat laid back captain who is tasked with skippering The Orville, which is an exploratory vessel. This captain, Ed Mercer, is recently recovering from a particularly difficult divorce, and as the first episode progresses, he soon learns that his ex-wife is to serve as his first officer. While this initially provides a comic foil and more than a bit of tension, it soon takes a back seat to the adventures and intrigue experienced by the various crew members as the ship goes about its daily voyages.

So, you might be wondering what makes The Orville more than a rehash of TNG-era Trek. Fortunately, while the plotlines are very reminiscent of the older series, The Orville has something that was experienced few and far between on the older shows: humor. Alongside its deep science fiction roots, The Orville is actually also a comedy.

For this reason, you get a lot of comic subplots that involve embarrassing situations for the main characters, and even during dire situations, many of the crew find plenty of excuses to crack jokes at the expense of the threat-of-the-week. For example, during an encounter with the dangerously zealous, Krill, it's revealed that their deity is called Avis. As a result, the helmsman, Gordon Malloy, makes extensive references to the car rental company.

This isn't to say that The Orville provides a constant barrage of one-liners and joke setups; in fact, there are some very serious themes that are explored from a week-to-week basis. This includes gender rights, the rights of the disenfranchised, and the effects that technology has on people. The show takes a lot of time exploring relationships in a more in-depth way than they were explored in any of the aforementioned Star Trek series.

There are essential differences between the series' setting and that of Star Trek; The Orville's Planetary Union seems a bit more inclusive than the United Federation of Planets, and transporter technology hasn't seemingly been developed by any of The Orville's species. Outside of that, this show is clearly a love letter to Star Trek, and this is probably a result of the stewardship of Seth McFarlane, who is a well-known fan of the 1987 through 2001 period of the series.

Like any Star-Trek-esque series, the Orville features an ensemble cast. You're gradually introduced to helmsmen, engineers, security officers, scientists, and a wide variety of supporting characters. Here's a look at some of the key players:

When it comes to this show's showrunner, you might be surprised to know that it's also the show's main character. Seth McFarlane, who has served as the executive producer of Family Guy for years, also helms the behind-the-scenes processes. McFarlane is a major fan of Trek, and he wanted the opportunity to bring Trek back to the airwaves. While the show isn't officially housed in Trek canon, the look and feel definitely accomplishes this goal.

The show spans several shooting locations, but for the most part, shooting is done using Universal Studios soundstages. Overall, this is a series that's very well worth watching, especially if you're a fan of Trek. In fact, with other Trek-related shows available like Star Trek: Discovery and Star Trek: Picard, it's easy to see why it's a good time to be a Trekkie. For those that aren't huge Trek fans, The Orville is also pretty great because it doesn't bog you down with technobabble, and the comedy makes the show very worth watching.

Recently, it was announced that the show's helmsman, Scott Grimes, and its divorcee first officer, Adrianne Palicki, tied the knot in a real-life wedding ceremony. The last time this happened in a series of this type was during the wedding of Star Trek: Deep Space Nine's Alexander Siddig and Nana Visitor. The wedding between Grimes and Palicki was only announced about four months before they got married, and before the announcement, their dating was only a rumor. 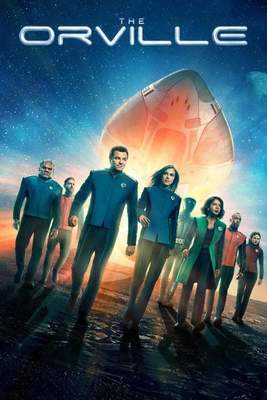 These are Providers which might be available to watch the show.
The official website of this TV-Show can be found here: http://www.fox.com/the-orville

* This is a sponsored link / the reviewed TV-Show might not be available with Amazon Prime Video Service / after the 30 days test period Amazon Prime might cause additional costs. The official website of this show can be found here: The Orville
Did you like reading this TV-Show Review? Yes No