"2 Broke Girls" was created by comedian Whitney Cummings and the director Michael Patrick King and was broadcast on the CBS network for six series before being canceled by the network. The show was given mixed notices by critics but received around 19 million viewers on average for its first season of 24 episodes.

The story revolves around the "2 Broke Girls" of the title who are thrown together when both are in a time of need. The character of Carolina Channing appears to be living the perfect life in the Upper East Side of Manhattan when her world falls apart around her. Caroline has never had to work as her father is a wealthy investment banker giving his daughter every possible advantage in life. However, things begin to go wrong for Carolina when her father is arrested for operating a Ponzi scheme and swindling billions of dollars from investors.

Carolina is forced to try and find a job but has no skills or friends after her money is declared frozen by the U.S. government. Caroline eventually finds herself in a diner in Brooklyn where she applies for a job as a waitress. She has no experience or skills for the job but is helped by her fellow waitress, Max Black who has come from an entirely different background to herself.

Max is the daughter of a poor single family headed by her mother who appears to have taken little care of her daughter before allowing her to find her own way in the world. Max works in the diner alongside the owner, Han Lee, cook Oleg, and cashier Earl. Max eventually shows Caroline the ropes of working in the diner and agrees to take her in as a roommate to help pay the bills. Mex also works as a nanny in the first season as the girls look to discover a way to improve their fortunes.

Eventually, the girls settle on a business plan of developing a cupcake company after Max bakes some for Caroline and they are loved by all who try them. The girls then spend their time looking for different ways of creating a company that will allow them to stop working in the diner. At the end of each episode, a running total is given to the audience to show how close they have got to their total during the course of the episode.

Whitney Cummings and Michael Patrick King created "2 Broke Girls" and began broadcasting the sitcom on the CBS network at the same time as Cummings was starring in her own sitcom, "Whitney." Cummings had arrived in Los Angeles attempting to become a serious actor and appeared in a drama screened at Cannes before turning to stand-up comedy in 2004. Michael Patrick King has a long list of credits as a writer and producer including "Will and Grace," "Sex and the City," and "Murphy Brown."

Beth Behrs appears in the role of Caroline Channing which she won after making her feature film debut in the comedy, "American Pie Presents: The Book Of Love." Behrs appeared in every season of "2 Broke Girls" and has returned to feature film work since the show was canceled, including the movie, "Hello, My Name Is Doris." Behrs is also a published author who has written a self-help book and authors a comic book, "Dents."

Kat Dennings is best -known for her role as Maxa Black in "2 Broke Girls" but has also become a featured actor in the Marvel Cinematic Universe. After starting her career with a role in the TV show, "Sex and the City," Dennings found a global audience with her role as Darcy Lewis in the "Thor" franchise for Marvel.

"2 Broke Girls" was a much sought after sitcom in 2011 when Whitney Cummings had become a much sought after actor and writer for the networks. The pilot for the show had not been filmed when a bidding war for the show broke out and was won by CBS, with the "Whitney" sitcom starring Cummings won in a bidding war for NBC. The show was shot in a multi-camera format with a live studio audience in place but found controversy when producers were accused of working on the laugh track to make it appear the audience were more entertained. Many fans believe the show suffered before its cancellation when it was moved in the schedule to Thursday nights with a new timeslot and had to wait for its premiere until the first weeks of the NFL season had been completed and CBS stopped broadcasting "Sunday Night Football."

The response to "2 Broke Girls may have been positive for viewers but critics were less kind and accused the show negative racial stereotypes. Many critics found the lead actors well drawn but complained the supporting cast had little space for development and were largely the butt of racist or sexist jokes. The Rotten Tomatoes website gives "2 Broke Girls" an overall score of 56 percent with the number of average viewers falling to just over seven million by the final season. Overall, the show is not seen as developing as it should have after a bright start with critics agreeing the reason for the loss of viewers was the lack of development of the characters.

Although she spends a large amount of her time discussing the use of marijuana with Caroline and the cashier, Earl there is not the depiction of Max ever smoking. Earl is a mysterious character with the character stating he started work at the diner in both 1962 and 1989. Earl is often described as a jazz musician and acts as a father figure to Max. 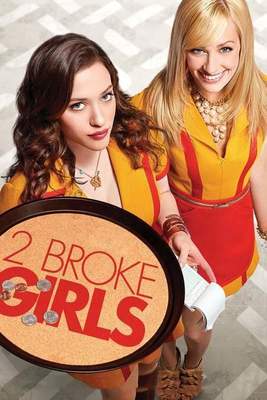 These are Providers which might be available to watch the show.
The official website of this TV-Show can be found here: http://www.cbs.com/shows/2_broke_girls/

* This is a sponsored link / the reviewed TV-Show might not be available with Amazon Prime Video Service / after the 30 days test period Amazon Prime might cause additional costs. The official website of this show can be found here: 2 Broke Girls
Did you like reading this TV-Show Review? Yes No