The AMC adaptation of the "Preacher" comic book has been hailed by critics for its faithful rendering of the world of fallen religious leaders and vampires. The series originally found fame when it was announced the comedic actor and writer, Seth Rogen was an executive producer and would oversee the transition from comic book to the small screen.

The story of "Preacher" follows the story of Jesse, a preacher in a small town in Texas who has been struggling to keep his faith alive in the midst of a crisis among his parishioners. Jesse is so bored and unfulfilled by his life that he gives his regular Sunday sermon to a bored and distracted congregation who pay him little attention. Jesse faces a number of problems from his congregation, including that of a young boy who confides in him that his father, Donnie is beating his mother, Betsy on a regular basis.

Jesse becomes annoyed when he tells the local police chief of the violence directed towards Betsy and is told she must make a formal complaint for him to investigate. As Jesse is struggling to keep his faith, an Irishman, Cassidy is flying to the Mexican city of Tijuana to party with a group of hedge fund managers who have chartered a private jet. Cassidy begins to grow suspicious with the direction of the plane and identifies the group and the pilots as assassins sent to kills him. Cassidy kills the other inhabitants of the plane and reveals himself to be a vampire by drinking the blood of the pilots and jumping from the crashing plane with nothing more than a bottle of blood and an umbrella.

The life of Jesse looks set to become even more complicated when his girlfriend, Tulip finds herself in a physical fight with a gangster which ends on the property of a Kansas farmer. Hiding the family of the farmer in the cellar of their home, Tulip returns to the outside and is revealed to have brought down a U.S. military-style helicopter with little more than a can and some toy soldiers.

After an altercation with Donnie, Jessie finds himself in jail but is released the next day to return to his church. Upon returning to the church, Jesse sees a bright light burst into the church and slam into his chest and put him in a coma which he remains in for three days. When Jesse returns to his congregation after his coma he is suddenly filled with various superpowers which he struggles to command and understand. The arrival of the bright light comes after Jesse once again questions why he has been abandoned by God and cannot find his way forward in the future.

After Jesse returns to the fold of his congregation and finds himself far more compelling and wise than he was in the past, the congregation of All Saint's Church grows with the arrival of Tulip and Cassidy. Even more new arrivals are waiting outside the church as the number of those interested in Jesse and his new powers continue to grow.

The cast of "Preacher" has a distinct British feel with the lead role of Jesse taken by Dominic Cooper, the star of "Mamma Mia!" and Howard Stark in the Marvel Cinematic Universe. The London-born actor first found fame on the stage in London's West End when he appeared in Alan Bennett's "The History Boys" and the National Theatre's adaptation of the "His Dark Materials" trilogy. Cooper solidified his position as a respected actor and well-known face on TV and film with his roles in "Abraham Lincoln: Vampire Hunter" and as the titular character of Ian Fleming in "Fleming: The Man Who Would Be Bond."

The career of "Preacher" actor Joe Gilgun has taken in two British soap operas alongside his work in the critically-acclaimed TV show, movies, and stage plays. Gilgun first came to the attention of the public as a child actor appearing in the long-running soap opera, "Coronation Street" before he moved on to stage roles. Gilgun suffers from ADHD and dyslexia which led to him taking a break from acting from his teens until his late-20s. Upon returning to acting, the Chorley-born actor took on the role of Woody in Shane Meadows, "This Is England" feature which led to several spin-offs.

The experienced writer and director, Sam Caitlin works alongside executive producers, Seth Rogen, and Evan Goldberg as the showrunner for the AMC show. Caitlin began his career writing the made-for-TV movie, "The Great New Wonderful" and went on to write for the critically-acclaimed, "Breaking Bad."

"Preacher" found a wide audience when news broke of comedian Seth Rogen and his long-time writing partner, Evan Goldberg writing the pilot episode alongside showrunner, Sam Caitlin. Rogen and Goldberg also co-directed the pilot and second episode in a pattern they would repeat for the second season. The show is a co-production of the AMC Network and Sony Pictures Television division which has overseen the first three seasons and will distribute the finale of the fourth season. The "Preacher" series is featured on Amazon Prime in the U.S. where it is available for streaming.

As with most TV shows, the first season of "Preacher" received a range of positive to mixed reviews from both professional critics and viewers. The Rotten Tomatoes site gives the first season of "Preacher" an average rating of 89 percent with those who had read the comic book series enjoying its close following of the original plot. The second season of the show would also score highly on Rotten Tomatoes and Metacritic with average ratings around the 90 percent score. Each season of the comic book adaptation has scored highly with critics and fans, but it has struggled to hold its audience on AMC with the third season experiencing an average viewership of over 2.5 million viewers compared to just 0.84 million viewers for season three.

All three of the main actors are from the U.K. and do not speak in their own accent throughout the run of "Preacher." Ruth Negga is of Ethiopian-Irish descent but speaks with a Texan accent throughout the filming of the show. Seth Rogen and Evan Goldberg had been fans of "Preacher" since their days at school together in Canada and wanted to make sure fans of the comic books were happy with their adaptation of the iconic characters. Rogen and Goldberg convinced the creators of the comic book series, Garth Ennis and Steve Dillon to join the writing team for an added layer of authenticity. 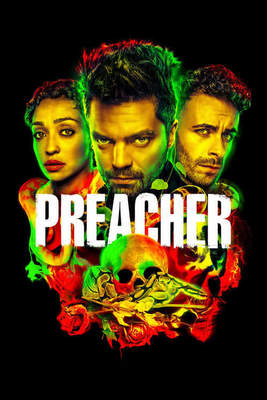 These are Providers which might be available to watch the show.
The official website of this TV-Show can be found here: http://www.amc.com/shows/preacher

* This is a sponsored link / the reviewed TV-Show might not be available with Amazon Prime Video Service / after the 30 days test period Amazon Prime might cause additional costs. The official website of this show can be found here: Preacher
Did you like reading this TV-Show Review? Yes No