The medical sitcom "Scrubs" aired on NBC and ABC for nine seasons under the creative control of showrunner Bill Lawrence who has become known for creating the comedies, "Cougar Town" and "Spin City." Lawrence has stated he is proud of the success of "Scrubs" which ran for a total of 182 episodes.

"Scrubs" began with the pilot, "My First Day" which is told through the eyes of the character of J.D., a new doctor at the hospital where he is starting work after medical school. J.D. arrives for his first day full of confidence and bravado but is really struggling to cope with the change to a hospital environment which he feels is a big step. On his first day, much of the premise of the show as a whole is set up as he meets the beautiful Dr. Elliot Reid.

J.D. tries to form a relationship between himself and Elliot when he gives her the answer to a question asked during rounds and then asks her out to dinner. Later on in their rounds, Elliot refuses to help J.D. and takes back the invitation to dinner he earlier gave Elliot. The show has used the flashback throughout its run beginning in the pilot episode which used the flashback to the previous day when the new doctors were given a talk by the legal expert Ted Buckland and met the head of the hospital, Dr. Bob Kelso.

During the episode, J.D. meets his future mentor, Dr. Perry Cox who begins the relationship they are to maintain throughout the first eight seasons which sees the older doctor spending his time shouting at his protege. As J.D. is failing to find his feet as a doctor in the hospital, his best friend and surgical intern, "Turk" appears to be enjoying his new role as the surgical team appears to be a group of high school jocks enjoying high fives and talking like they are in a locker room. Turk has also managed to form a relationship with Nurse Carla, which was consummated in a closet on the first day of work.

The second day begins and life for J.D. does not seem to be getting any better as he has the first interaction with the Janitor. J.D. arrives and finds the Janitor attempting to find a solution to an automatic door which refuses to close. J.D. asks if a penny is stuck in the door leaving the Janitor believing the intern has placed a penny under the door on purpose leaving him to swear vengeance on the newly qualified doctor.

J.D. struggles yet again when he is called to attend a patient who is coding, he chooses instead to hide in a closet and finds Elliot already hiding. As the day progresses, J.D. relies on the nurses to help him before he finally has the confidence to insert a chest tube under the watchful eye of Dr. Cox. Elliot finally shows she cares for J.D. by helping him when a patient he has been working with dies and the family need to be informed. "my First Day" introduced the main characters but does not include much of the absurd humor which became a staple of the series as it remains rooted in the real world of medicine.

Bill Lawrence has been a TV writer and sitcom showrunner since the 1990s when he took a role as a staff writer in the ABC sitcom, "Billy" soon after graduating from college. The writer would go on to write for "The Nanny" and a number of other sitcoms before he co-created the political sitcom, "Spin City." The success of "Spin City" set off a period of prolonged success for Lawrence and his Doozer Production Company which included "Scrubs" and "Cougar Town."

Zach Braff found his breakout role with his performance as John "J.D." Dorian in "Scrubs" which won him international acclaim. The actor, writer, and director had been working in small roles in Hollywood for a number of years before he took the role of J.D. including a role in Woody Allen's "Manhattan, Murder Mystery." After starring as J.D. in 2011, Braff went on to direct the movie, "Garden State" which won him acclaim as a writer and director. He later starred in the Disney movie, "Oz: The Great and the Powerful."

The love interest of J.D. in the early season is Dr. Elliot Reid, who is played by Sarah Chalke. The actress had been thrown to prominence in the early 1990s when she took over the role of Becky in "Roseanne." She would later return to the "Roseanne" spinoff, "The Conners" in the role of Andrea.

Bill Lawrence was forced to make a deal with ABC Studios which backed the production of the show which he found unusual at the time of filming which allowed NBC to broadcast "Scrubs." To add to the authenticity of the show it was filmed at a disused hospital in North Hollywood instead of in a studio which Bill Lawrence felt allowed the cast to get further into character. By the start of the ninth season, "Scrubs" had shifted to the ABC network and would move into a studio setting apart from exterior shots which were filmed at a new location in Hollywood.

"Scrubs" was a critical success from its very first season which"Entertainment Weekly" gave a grade of A- to when it first premiered. The focus of most critics was on the cast and writing which allowed the humor to be enjoyed by most. The inclusion of the fantasy sequences shown as the daydreams of J.D. grew in importance to the show over the seasons and was met with a positive response. "Scrubs" scores highly for its first six season with both Rotten Tomatoes and Metacritic but the quality of the show is described as slipping over the course of the seventh and eighth seasons.

Problems began to arise for "Scrubs" when it was announced the seventh season would be the last on NBC and ABC would take over its broadcast. The switch to ABC saw a decline in the consistency of the show which was followed by the decision to relaunch "Scrubs" for season nine without many main characters. Only the characters of Dr. Cox and Turk remained as series regulars for season nine with the consistent return of J.D. said to have caused confusion for some fans before the show was canceled at the end of the season.

Bill Lawrence has stated "Scrubs" is inspired by the life of one of his college friends who became a doctor and had many of the experiences of J.D. in real life. The band led by the character of Ted is actually a group in real life called The Blanks who play around Hollywood on a regular basis. The North Hollywood Medical Center used as the location for "Scrubs" has appeared in many shows, including "The Sopranos." 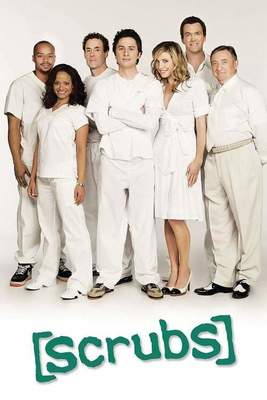 These are Providers which might be available to watch the show.
The official website of this TV-Show can be found here: http://abcstudiosmedianet.com/web/showpage/showpage.aspx?program_id=002668&type=lead

* This is a sponsored link / the reviewed TV-Show might not be available with Amazon Prime Video Service / after the 30 days test period Amazon Prime might cause additional costs. The official website of this show can be found here: Scrubs
Did you like reading this TV-Show Review? Yes No