"Mom" finds comedy in addiction and the reuniting of a family

Now ranked as the third-highest audience for a comedy on U.S. network TV, "Mom" has always tread the fine line between darkness and comedy as it explores a range of issues. At the heart of the show is the relationship between estranged mother and daughter, Bonnie and Christy Plunkett. The pair are both recovering alcoholics who have repeated many of the same mistakes in their lives and are trying to avoid Christy's daughter, Violet from repeating many of the mistakes of her mother and grandmother.

The series begins with Christy moving to Napa, California where she hopes to start a new life by returning to school in her bid to try and become a lawyer. When she arrives in Napa she is soon joined by her mother, Bonnie, who is trying to recover from her own alcoholism and build a healthy life with her boyfriend, Adam. Seeing the efforts being made by her daughter, Bonnie has decided to try and get clean and sober to try and help Christy to become a better person by helping look after her children and helping her learn about her own past. The efforts of Bonnie to become a better person are hampered by her previous career as a drug dealer and her lifestyle of partying. Bonnie and Christy spend much of the first season looking for the daughter's real father who abandoned them on Christmas Eve when Bonnie was pregnant and 15-years-old.

Christy and Bonnie also hope to halt Christy's 17-year-old-daughter fro following their bad decisions and falling pregnant as a teen or becoming addicted to alcohol and drugs. At the start of the first season, Violet is a popular and successful high school student who is working to attend college despite not sharing a happy relationship with her mother. Bonnie and Christy spend much of their free time attending Alcoholics Anonymous meetings where they build a close relationship with a group of women who are following their own journey towards sobriety. The group becomes a close-knit family with their own problems and issues as they try to build a better life for themselves.

The success of "Mom" has been credited to the fact the cast has the ability to provide both comedic and dramatic moments for the audience which allows them to discuss difficult subjects. The characters are recovering addicts and have their dark moments throughout the show's first six seasons which has already been extended for a further three seasons. The characters attending Alcoholics Anonymous meetings consist of Marjorie, Jill, Wendy, and Tammy take up the roles of a family helping each other through the trials of living life as a recovering alcoholic.

Like many U.S. sitcoms in the 21st-century, one of the showrunners is the legendary Chuck Lorre, who is the brain behind a number of popular shows such as "The Big Bang Theory", "Two and a Half Men", and "Mike and Molly." Lorre works on "Mom" alongside fellow creatives Eddie Gorodetsky who is a consistent collaborator of Lorre and writer Gemma Baker.

One of the main reasons for the success of "Mom" is the comedy partnership of stars, Anna Faris and Alison Janney. Despite the fact, the return of Anna Faris to TV after a number of film roles was the major marketing option for the launch of "Mom" the role of Bonnie has seen a career resurgence for Alison Janney. After finding success in the political drama, "The West Wing," Janney has won five consecutive Primetime Emmy nominations for the role of Bonnie, winning twice. The Ohio native was trained at the Royal Academy of Dramatic Art in London and made her name with the role of C.J. Cregg in "The West Wing." Janney recently won an Academy Award for her role in the 2017 biopic, "I, Tonya."

Anna Faris is the headlining star of "Mom" and has been a success on the small and big screens for a number of years. The star began her career with a role in the global phenomenon, "Friends" before launching a successful film career. After her breakout role in the "Scary Movie" franchise, followed by starring roles in movies such as "The House Bunny" and "Overboard."

Another familiar face for U.S. sitcom viewers is Jaime Pressly, who is the best known for her role as the ex-wife of the titular character in "My Name Is Earl." Pressly plays the role of Jill Kendall, a wealthy but impulsive member of the Alcoholics Anonymous group attended by Bonnie and Christy.

"Mom" was one of the first sitcoms produced under the four-year deal signed by Chuck Lorre with CBS in 2012 which tied his company to the network. Lorre and Gorodetsky act as executive producers on the show alongside actor Nick Bakay who takes on producing and writing roles for the show following his earlier career high of appearing in "Sabrina, the Teenage Witch."

The sitcom is a production of Chuck Lorre Productions and is produced and distributed by Warner Bros. Television who also provide the location for filming at their lot in Burbank, California in front of a live studio audience. Many U.S. sitcoms are criticized for their depiction of female characters but "Mom" has a largely female cast with an average of 50, which producers and cast members believe make its story all the more realistic.

"Mom" has a long history of success and critical acclaim since it was launched with season one in 2013 and has risen to become the third most-watched sitcom on U.S. TV. The partnership of Faris and Janney has been given a large amount of acclaim with the many awards Janney has won for her role showing how much both critics and fans appreciate her performances. By season six, the average number of viewers each episode was attracting on CBS was over 10 million with the themes of the show making it a success in countries including Australia, the U.K., and New Zealand. Critical response to "Mom" has been extremely positive with an average Metacritic score of over 80 for the first three seasons of the sitcom with Rotten Tomatoes giving the show an average critical rating of 88 out of 100. Seasons seven, eight, and nine of "Mom" have already been given the green light and will be broadcast in the coming years on CBS.

Chris Pratt played a major role in the development of "Mom" after telling his wife, Anna Faris she was making a mistake passing on the script. Faris revealed she put down the script a few pages in and moved on to reading a potential movie script, Patt read the pilot of "Mom" and explained to Faris why he thought she would be a success in the role of Christy. Although she was warned about the possibilities for the story arc for her character, Violet actress Sadie Calvano had to wait for scripts to be written to discover what life held in store for her teenage character over the course of the first three seasons. 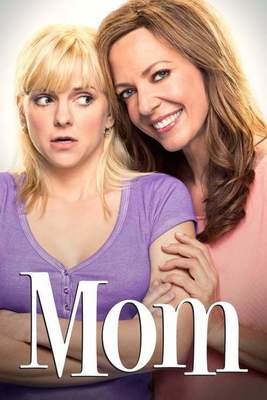 These are Providers which might be available to watch the show.
The official website of this TV-Show can be found here: http://www.cbs.com/shows/mom/

* This is a sponsored link / the reviewed TV-Show might not be available with Amazon Prime Video Service / after the 30 days test period Amazon Prime might cause additional costs. The official website of this show can be found here: Mom
Did you like reading this TV-Show Review? Yes No