The Netflix-produced Tv show, "Narcos" has been a critical hit as it follows the story of the drug dealer, Pablo Escobar and the DEA Agent determined to catch him, Steve Murphy. Creators and showrunners, Chris Brancato, Carlo Bernard, and Doug Miro have created a show detailing the rise of Escobar as he came to prominence as a drug trafficker in the 1970s to the end of his reign in the 1990s.

"Narcos" follows the story of DEA Agent, Steve Murphy as he tr6acks the rise of one of the leading drug dealers in Columbia, Pablo Escobar. The series opens in the late 1970s when he is setting out on a career as a trafficker of goods around the country including cigarettes and alcohol. The movement of these goods is completely forbidden and Escobar risks jail time if he is caught moving these items around the nation, but is trying to build a better life for himself and his family.

The life of Escobar changes forever when he is introduced Matteo "Cockroach" Morena, who has begun to manufacture cocaine and is in need of a way of moving it around the country of Columbia. The cockroach is a Chilean chemist who has the idea of going into business with Escobar and introducing him to the powerful effects of cocaine which he feels will be profitable long into the future. Columbia itself is undergoing a series of changes in the 1970s and Escobar sees the changing culture as the perfect opportunity for the shift in business to cocaine.

As the first season progresses, Escobar finds himself taking over the business from Cockroach and develops better and larger labs in the rainforest where the local authorities are not concerned about his activities. In fact, the Columbian government turns a blind eye to the work of Escobar as he is bringing large amounts of U.S. currency to the nation and improving the economy. Escobar looks to move the focus of his work to the U.S. where he can gain top dollar for his cocaine by selling it to the rich and famous of Miami where he has developed a route to move his product across the border.

In the U.S., the Drug Enforcement Agency sees the rise of Escobar as a major problem as the amount of gang-related violence is growing across Florida and spreading into other areas of the East Coast. DEA Agent, Steve Murphy is slowly taken into the world of Columbian cocaine when he is asked to head a task force to work with local authorities and bring an end to the work of a local drug dealer. Escobar has continued to develop his labs in the rainforest and is now facing his first serious threat to is business in the shape of an American DEA agent and local cop, Javier Pena.

The show was created y the team of writers, Chris Brancato, Carlo Bernard, and Doug Miro with Brancato taking many of the writing duties following his long history in TV production. Brancato began his career working on the primetime soap opera, "Beverly Hills, 90210" and episodes of "The X-Files." Brancato has also written the movie, "Species II" and worked on various parts of the "Law & Order" franchise.

The Brazilian actor, Wagner Moura has taken home many plaudits for his role as Pablo Escobar in the "Narcos" Tv show over the first two seasons. After working in Brazil and across South America for the majority of his early career, Moura found fame in the Berlin Film Festival-winning move, "Elite Squad" before he rose to international prominence in the "Narcos" series for Netflix.

The part of Steve Murphy is played by American actor, Boyd Holbrook who takes the role and brings a sense of the desire to end the drug trade which the U.S. had in the late 70s and early 1980s. Holbrook has a long history of success in various roles such as his parts in the prestigious "Milk" and "Hatfields & McCoys." Other movies the actor has appeared in include "Logan" and "Gone Girl."

The show is produced by Gaumont International Television which partnered with Netflix to create a series of shows, including "Narcos." Chris Brancato partnered with Brazilian filmmaker Jose Padilha who had earlier directed Wagner Moura in "Elite Squad" which had become the highest grossing movie in the history of Brazil. "Narcos" is streamed through the Netflix streaming service which acts as a production partner for the show and streams the show's three seasons.

"Narcos" continues the excellent run of critical success achieved by various Netflix series which has resulted in the show achieving a rating on Rotten Tomatoes of 79 percent for the first season. Metacritic continues the impressive nature of the "Narcos" series which has resulted in the show receiving a critical score of 77 on the review aggregator. Netflix does not publish details of viewer ratings. The completion of the story arcof Pablo Escobar did not prove to be the end of the show, with a spinoff taking the form of the third season which was titled, "Narcos: Mexico" and continued the story of the DEA's war on drugs. Despite the third season is a form of a spinoff, the show has received its best critical reviews for the third season which features the ongoing war on drugs which was fought throughout the 1990s against Mexican drug cartels.

The visual look of the TV show was shocking to some, but Pablo Escobar was always taking photos and video of himself which designers used to create the entire look of the movie. Wagner Moura is a native Brazilian meaning he speaks Portuguese in the Brazilian dialect and did not know any Spanish before he took the role of Pablo Escobar in the "Narcos" TV show. "Narcos" shows the wealth achieved by Pablo Escobar in his years alone of the world's top drug smugglers but nobody actually knows exactly how much money he made over his years in the business. Some estimates stated he was the seventh richest man in the world at various times with his wealth enhanced by his smuggling of over $70 million worth of cocaine each week at the height of his success. 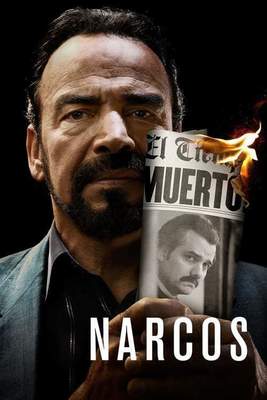 These are Providers which might be available to watch the show.
The official website of this TV-Show can be found here: http://www.netflix.com/title/80025172

* This is a sponsored link / the reviewed TV-Show might not be available with Amazon Prime Video Service / after the 30 days test period Amazon Prime might cause additional costs. The official website of this show can be found here: Narcos
Did you like reading this TV-Show Review? Yes No

Fresh Off the Boat