How I Met Your Mother
Carter Bays, Craig Thomas
Comedy

How I Met Your Mother - Review

"How I Met Your Mother," Tells The Story Of Ted Mosby

The CBS sitcom, "How I Met Your Mother" ran from 2005 to 2013 with nine seasons of the show airing before the finale solved one of the main mysteries of TV in the first decade of the 21st-century. The sitcom was focused on the life of Ted Mosby and his small group of friends, Marshall, Lily, Barney, and Robyn. The show was focused on the personal lives of the group of friends with the plot driven by the older Ted who is recounting the story of his path to meeting the mother of his two children in the year 2030.

In season one, "How I Met Your Mother" begins with the 27-year-old Ted Mosby is living in a New York apartment with college friend Marshall and kindergarten teacher Lily. After years of dating, Marshall finally proposes to Lily and prompts Ted to consider his life and begin the search for a bride of his own. As he begins his search to find a soulmate, Ted is hindered in his attempts by his friend, Barney who sees no reason why any of the group should get married. Barney becomes a feature of the show for his womanizing ways and the elaborate plans he tends to make as he attempts to woo different women throughout the series.

As he begins his search for a soul mate, Ted Mosby meets a news reporter, Robyn who he has an immediate attraction to but the couple eventually decides to remain, friends, as Robyn seeks to further her career. Throughout the nine seasons, the older Ted talks to his children providing clues to the identity of their mother, including the immediate revelation upon her entry to the show that Aunt Robyn is not the mother of his children. The majority of the first season of "How I Met Your Mother" focuses on the search for a partner by Ted Mosby with the focus shifting to the rest of his circle of friends as the show progresses. The early seasons are marked by the nature of the on and off relationship between Marshall and Lily, and the different approach to life of Barney to the other members of the group.

The plot of "How I Met Your Mother" remains largely linear throughout the entire nine seasons with the final season of the show taking a slightly different approach to the main characters. All episodes up to the finale take place in the three days prior to a wedding before leading to the completion of the story of who is the mother of the children of Ted Mosby and how the lives of the protagonists played out up to the year 2030.

"How I Met Your Mother" was born from the friendship between comedy writers, Carter Bays and Craig Thomas who had spent much of the previous decade up to 2005 working on U.S. TV shows such as "American Dad" and "The Late Show With David Letterman." The two had been friends since college and had been approached to create a pilot for CBS when they decided to draw own their own experiences as college friends and struggling writers in New York to create the show. The showrunners have been open in their admissions of the character of Ted Mosby being based on Carter Bays and Craig Thomas being the basis for Marshall.

The chances of success for "How I Met Your Mother" were not seen as high when it was first pitched and the pilot planned. Much of the fear from CBS was based on the fact the show was set to star the relatively unknown Josh Radnor as Ted Mosby. Radnor had made his name on the Broadway stage but had few TV or film credits to his name when he took on the role.

Carter Bays and Craig Thomas wanted the U.S. public to get to know the cast of "How I Met Your Mother with few preconceived ideas regarding the cast. Jason Segel took on the role of Marshall before finding fame as a comedy writer and actor on film when he had been working on the Judd Atapow shows, "Freaks and Geeks" and "Undeclared." Since appearing in "How I Met Your Mother" Segel has written and starred in "The Muppets" and "Forgetting Sarah Marshall."

The creators of "How I Met Your Mother" credit much of the success of the show to the work of Cobie Smulders as Robyn, the Canadian reporter who Ted falls in love with early in season one. Smulders was relatively unknown after only appearing in a series of guest roles before arriving on "How I Met Your Mother." Bays and Thomas have stated they wanted the audience to discover Robyn free of the baggage a famed actress brings and fall in love along with Ted as the first season progresses. Since taking on her role as Robyn in "How I Met Your Mother", Smulders has become known for her role as S.H.I.E.L.D. agent Maria Hill in the first phase of Marvel movies alongside Samuel L. Jackson.

One cannot discuss "How I Met Your Mother" without a mention for Neil Patrick Harris as Barney. The role was a departure for the former star of "Doogie Howser M.D." Despite appearing in a number of movies following the conclusion of the medical drama in 1993, Harris showed his comedic talents to a mainstream audience for the first time as Barney and saw his career relaunched in the 21st-century.

The creative team of Carter Bays and Craig Thomas wrote a number of episodes for "How I Met Your Mother" and remained in creative control throughout its nine-season run. Unlike many other sitcoms, "How I Met Your Mother" used only four directors throughout all nine seasons with Pamela Fryman directing 196 of the 208 episodes and Neil Patrick Harris directing a single show. Them tune to the CBS sitcom is a small part of the song, "Hey Beautiful" by The Solids, who counts Bays and Thomas as members.

"How I Met Your Mother" came into being at a time when the majority of shows were looking to use the mockumentary genre as their main narrative driver. The use of the future Ted Mosby talking to his children about his early life allowed the narrative to follow a similar path to other shows, such as "The Wonder Years." The sitcom may not have reached the global reach of similar sitcoms, "Friends" for example, but has a strong following among fans who have given early seasons positive critical reception. The creators of the show have allowed a Russian adaptation of "How I Met Your Mother" to be filmed and attempted to create a spinoff series, "How I Met Your Father" following the completion of the original show. In the U.K., "How I Met Your Mother" was broadcast on the Channel 4 network.

The entire show could have taken a very different turn if the creators of "How I Met Your Mother" are to be believed. Actress, Jennifer Love Hewitt was approached on numerous occasions to take the role of Robyn before Cobie Smulders eventually took the part. Alyson Hannigan eventually took the role of Lily on the insistence of Craig Thomas' wife. Thomas revealed his wife was unsure about their relationship being used as the basis of two characters in a sitcom but agreed as long as Hannigan played her on screen. Despite the laughter of the audience, "How I Met Your Mother" was filmed on a closed set because of the multiple locations involved in each episode. After the show was filmed and edited, an audience was brought in to watch the finished product with their laughter added later. 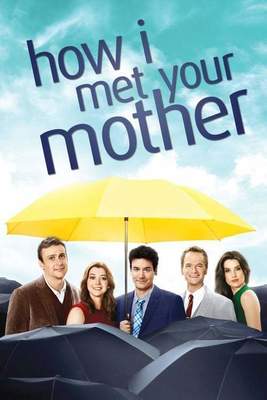 These are Providers which might be available to watch the show.
The official website of this TV-Show can be found here: http://www.cbs.com/shows/how_i_met_your_mother/

* This is a sponsored link / the reviewed TV-Show might not be available with Amazon Prime Video Service / after the 30 days test period Amazon Prime might cause additional costs. The official website of this show can be found here: How I Met Your Mother
Did you like reading this TV-Show Review? Yes No