The "Star Trek" franchise has been one of the most popular in the science fiction genre since the first seasons aired on U.S. TV in the 1960s. Since then, the franchise has taken in a number of TV shows and movies starring original cast members of the TV shows and a recent reboot of the movie franchise. What sets "Star Trek Discovery" apart from other members of the franchise is the fact it was produced for the CBS All-Access streaming platform in the U.S.

The premise of "Star Trek Discovery" is based around the war between the Klingon species and the Federation. The series takes place around a decade before the events of the first series of the original series of "Star Trek." The show begins with the first officer of the U.S.S. Shenzzou, Michael Burnham leading her ship on an exploratory mission to explore the problems affecting a damaged satellite in a binary star system. Burnham and her crew are looking for the source of the problem when they come across an isolated spacecraft which does not conform to the usual Klingon style of craft. After being attacked by a lone Klingon, Burnham has to make a decision about how to react which will have consequences for the entire galaxy as the war between the Federation and the Klingon take a number of twists and turns based on the actions of Burnham.

During the first season of "Star Trek Discovery", the character of Michael Burnham takes on many of the traits of the legendary Captain Kirk as she refuses to play by the rules all the time. After eventually making her way to the U.S.S. Discovery, Michael Burnham takes on a key role in the way the war is fought over the course of the first season which sees the Klingon race become the key antagonists for members of the Federation. In the second season, the members of the U.S.S. Discovery are presented with another problem in the form of a mysterious individual known as the Red Angel.

Getting "Star Trek Discovery" to the screen proved a difficult task for the initial showrunner, Bryan Fuller who made his name writing for "Star Trek: Deep Space Nine." Fuller was the initial showrunner for the first season of "Discovery" and was said to have been inspired by the 50th anniversary of the original series, "Star Trek" in 2016. Fuller stated his hopes for a new "Star Trek" series was based on the effect he felt the show had on minority groups inspired by the vast array of races in the original series from the 1960s. Fuller left the show before filming began and was replaced by the two co-showrunners he brought to the show, Gretchen J. Berg and Aaron Harberts. The trio had worked together on Fuller's, "Pushing Daisies." The main story arc of Michael Burnham is based on the treatment created by Bryan Fuller for the show before he departed and left Berg and Harberts in charge.

Despite the name of the character being Michael Burnham, the role is played in "Star Trek Discovery" by the actress Sonequa Martin-Green. The American actress was previously known for her role in "The Walking Dead" as Sasha Williams and for her many appearances in "The Good Wife." The "Once Upon A Time" actor was the protagonist of the series despite her character being the first mate of the U.S.S. Discovery instead of the traditional Captain.

The role of Captain Gabriel Lorca was taken on by the British actor, Jason Isaacs who has appeared in numerous TV shows and films. Perhaps best known for his role as Lucius Malfoy in the "Harry Potter" franchise, Isaacs rose to prominence in blockbuster movies, "Deep Impact" and "The Patriot." Throughout much of his career, Isaacs has taken on the role of the English villain but has become a popular stage actor in the U.K. taking on roles by Harold Pinter and other great playwrights.

Shazad Latif also appears in "Star Trek Discovery" as the human Tyler and takes on a new genre of science fiction. The British-born actor has taken on a number of roles, including that of Dr. Jekyll in "Penny Dreadful" and Tariq in "Spooks." Despite his many different roles, Latif remains well-known in the U.K. for his role as Clem Fandango in the popular sitcom, "Toast of London" opposite Matt Berry.

"Star Trek Discovery" is a major part of the chronology of the franchise but is set outside the universe created for the rebooted movies. In order to keep the show within the requirements of the "Star Trek" franchise, it was a co-production of CBS, Roddenberry Entertainment, and The Living Dead Guy Productions. To maintain the authenticity of the show as a part of the "Star Trek" franchise, Bryan Fuller decided to bring on board the son of legendary producer, Gene Roddenberry as a consulting producer.

The filming of "Star Trek Discovery" took place in Toronto at the city's Pinewood Studios with many of the sets built specifically for the latest entrant into the "Star Trek" franchise. Despite the science fiction show being set in the furthest reaches of space, various physical locations across Canada were used in filming, including the large Aga Khan Museum. The first season of "Star Trek Discovery" was launched on CBS All Access with all future episodes released via the same platform. From season two onwards, Netflix purchased the rights to broadcast episodes one day after their release on the CBS platform.

Undoubtedly, "Star Trek Discovery" is well worth a watch as it has achieved an impressive average rating of over 80 percent on Metacritic and Rotten Tomatoes. The main criticism of the first season is the slow start to episode one which many critics believed slowed the pace until the second episode. The first season achieved a score of 82 percent for reviewers on Metacritic and the second season built on this success with an average rating of 84 percent. One of the main aspects of the success of the first season was the cinematic nature of the cinematography of the show which was said to be inspired by "Star Trek: The Motion Picture" and the reboot of the franchise helmed by J.J. Abrams.

"Star Trek Discovery" may have used the largest soundstage in North American at the Pinewood Studios Toronto site, but the shuttle bay is completely computer generated with actors performing in front of a green screen. Throughout 'Star Trek" history, the titles of episodes have been long with "Discovery" featuring the second-longest title in the history of the show. "The Butcher's Knife cares not for the Lamb's Cry" is only beaten in length by the original series episode, "For the World is Hollow and I have touched the Sky." 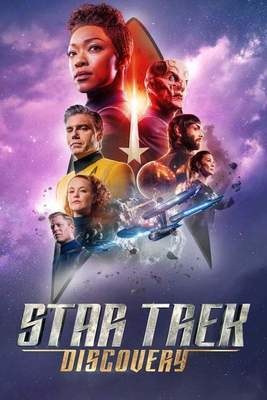 These are Providers which might be available to watch the show.
The official website of this TV-Show can be found here: http://www.cbs.com/shows/star-trek-discovery/

* This is a sponsored link / the reviewed TV-Show might not be available with Amazon Prime Video Service / after the 30 days test period Amazon Prime might cause additional costs. The official website of this show can be found here: Star Trek: Discovery
Did you like reading this TV-Show Review? Yes No