Brothers Damon and Stefan Salvatore compete for the affection of a high school teen named Elena Gilbert. They return to their old hometown of Mystic Falls, Virginia to settle their disputes. Damon initially wanted revenge against his brother for turning him into a vampire before they put their conflict to rest.

Production: Kevin Williamson was approached to be the executive producer of The Vampire Diaries. At the time, he held little interest in it due to the series being too similar with that of other vampire tales. At Julie Plec’s urging, Williamson delved into the novels and the narrative drew his interest. After reading through the novels, Williamson decided that the town of Mystic Falls will be the focal point of the new series instead of the high school.

The CW eventually green-lit the pilot episode in February 2009, where Williamson and Plec would take the helm as executive producers and head writers for the show. Filming was done in Vancouver, British Columbia for the pilot, with the rest of the episodes filmed in Covington, Georgia. The latter doubles as backdrop for the fictional town of Mystic Falls, Virginia and other communities around the Greater Atlanta area in order to leverage tax incentives. By May 12, 2012, a fire occurred within one of the buildings of Clark Street in Covington that was meant to be used as part of the Mystic Falls setting for the show.

An order was made for 22 episodes on October 21, 2009 after Season 1 showed strong ratings during its first half. A series spin-off called The Originals talk in-depth about the original vampire family that is part of the backdrop of The Vampire Diaries. The CW renewed The Vampire Diaries for a second and third season in February 2010 and April 2011, respectively. Season 2 premiered on September 9, 2010 while Season 3 premiered on September 15, 2011.Review:

For fans of vampire romances, The Vampire Diaries would suit their fancy. It was popular enough to the point where it caught the attention of major social media outlets and drove profits for The CW network. By the second and third seasons the show began to really pick up steam, which is a testament to how good it really is. No, this is not your standard cookie-cutter vampire show, it’s a vampire show with substance. It’s the kind of show where female fan wars would ensure over who the hottest male lead is.

The Vampire Diaries at its core is meant to explore feelings and questions where teens struggle ever since the word ‘teenager’ came about. The drama itself is something of a mixed bag that can make you cringe or cheer based on the type of viewer you are.Trivia: 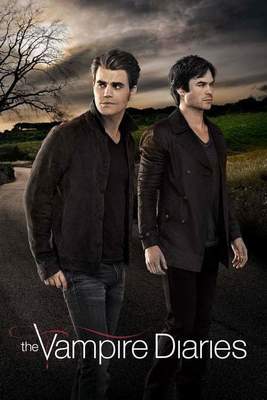 These are Providers which might be available to watch the show.
The official website of this TV-Show can be found here: http://www.cwtv.com/shows/the-vampire-diaries

* This is a sponsored link / the reviewed TV-Show might not be available with Amazon Prime Video Service / after the 30 days test period Amazon Prime might cause additional costs. The official website of this show can be found here: The Vampire Diaries
Did you like reading this TV-Show Review? Yes No