The Expanse: A Rare Hard Sci-Fi Epic for Genre Fans

If you're into a style of science fiction that's a little more realistic than the Star Treks and Star Wars, then the Expanse, which is based on a book series by James S.A. Corey, might be a good choice for you. This series follows the interplanetary exploits of the Belters, who work on mining asteroid belts and the so-called (by the Belters) Inya Loaders, who are the citizens of both Mars and Earth.

For a sizeable portion of the series, we follow the main characters, which include the crew of the former Mars vessel The Rocinante, various Belter clans, and Earth and Mars representatives. As the show progresses, we start to see a lot more of the greater universe and some of the other potential powers at play. Similarly to shows like Game of Thrones, The Expanse deals a lot with political intrigue and how infighting can often blind people to greater threats or more in-depth issues.

For example, the initial storyline has to deal with Thomas Jane's character, the Belter detective, Josephus Miller, who is tasked with finding the heiress to one of Earth's largest corporate conglomerates. The company does business throughout the entire system, and Julie Mao, who is the daughter of the CEO, Pierre Mao, proves to be a quarry that's very hard to find thanks to a wide variety of factors that come into play throughout the series.

While the Belter detective searches, we're also introduced to several key characters, which include the crew of the aforementioned Rocinante. This crew comes from varied backgrounds, which is perfect considering that many of the systems factions are represented. As a result, viewers get to understand the stakes a bit more as they watch the characters interact with one another.

Through these integral characters, you learn quite a lot about The Expanse universe. For example, Earth and the Mars colonists are almost always rattling sabers, and on the brink of war, the Belters are disenfranchised, and there's a greater conspiracy happening in the shadows that will affect everyone in the Sol system.

Each of the characters have a certain degree of self-interest, but like many shows of the type, each starts to become closer if not family-like. During the show, there are few breaks, and when they are present, they are very brief. When it comes to interpersonal relationships, each of the characters experience a degree of love, conflict, and even betrayal, and this is not a series that is afraid to kill off a main character from time to time.

Also, in some seasons, you can expect a bit of gore, which adds a bit to the realism of the series, but if this turns you off, it's a relatively rare plot device that you can mostly avoid. Most people will agree that all of the characters are flawed, which can lead to an excellent sense of drama and uniqueness when it comes to the individual plots that make up the series.

This show has an excellent cast of talented actors. Here's a breakdown of some of the most important:

The show is run by Naran Shankar, and he's run the show from its beginnings on SyFy up until its current run, which is going to be hosted on Amazon's Prime Video service. It's thanks to Naran's expert showrunning that the show was able to garner a sizeable enough following that Amazon was willing to pick it up after its cancellation on the other network.

This show really stands out thanks to the top-tier effects and stellar acting among the cast. In many sci-fi shows, the action doesn't feel very realistic, which is where The Expanse excels. When there's a space battle, gravity and inertia is a major factor for the combatants and little concessions like the fact that the space-born Belters aren't able to withstand Earth's gravity very well prove to be a very nice touch when it comes to realism.

This is definitely a series very well worth watching. Not only is it well-acted, but the plots are complex and engaging, which is perfect for anyone looking for an excellent series to check out after the end of Game of Thrones. If you're looking to compare this series to another science fiction classic, it's relatively similar, at least in scale, to the revitalization of Battlestar Galactica, which came out in the early 2000s. Additionally, while the show was indeed canceled by Syfy, it's found a new home at Amazon thanks to a very dedicated fan response. The show being hosted on their streaming platform means that earlier episodes can be easily viewed, and new eps will have less censorship. 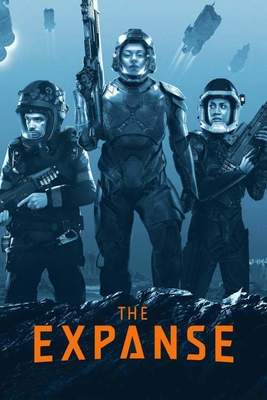 These are Providers which might be available to watch the show.
The official website of this TV-Show can be found here: https://www.amazon.com/dp/B018BZ3SCM

* This is a sponsored link / the reviewed TV-Show might not be available with Amazon Prime Video Service / after the 30 days test period Amazon Prime might cause additional costs. The official website of this show can be found here: The Expanse
Did you like reading this TV-Show Review? Yes No

Fresh Off the Boat
Comedy