Back to the Future Gone Crazy: Rick and Morty

It's important to remember that Rick and Morty started out as a pastiche of the Back to the Future series of movies. The original short, which was called The Real Animated Adventures of Doc and Marti, was a direct and risqué parody of the film series that featured more than a few allusions to sex and violence. This short was a hit, and the creative team, which consisted of Justin Roiland and Dan Harmon, got together and pitched a brand new series for Cartoon Networks line of adult-themed Adult Swim.

Similarly to Back to the Future, this series follows a scientist and his young co-adventurer. The chief difference between this franchise and the movie series is that the scientist is a clearly depressed, functional alcoholic, and his partner in crime is his young grandson who has anxiety issues. The show deals with time travel tropes, science fiction storylines, and there's always at least one freak-out between the two main characters.

This is not an animated show for kids; not only is sex a constant plot device for the series, but this is definitely a show that revels in a bit of blood and gore. Rick is also something of a nihilist, so despite the fact that he's taking his grandson on all of these epic adventures, he doesn't really feel that anything has any real meaning. In fact, the fact that Morty survives many of the adventures that he experiences tends to seem to stem from happenstance; they are always in danger, and Rick isn't afraid to bring more members of his family along for the ride.

In fact, domestic family drama is also a major story point that's consistently explored throughout the series. Rick's daughter, Beth, clearly has some lingering issues with her father, and the relationships that she has with the rest of her family are clearly strained. Insofar as Morty, this character only seems mildly interested in the sometimes intergalactic adventures that he experiences with his alcoholic grandfather, and since his grandfather is so smart, you'll often find that Morty is usually in a state of constant confusion.

The plot points of this series are also usually done for comic effect; there are episodes with suddenly-sentient dogs, Rick having a relationship with a hive mind creature, and there's even an episode where the scientist turns himself into a sentient pickle. Still, at the center of all of these plot points are some dyed-in-the-wool classic sci-fi tropes that usually have a new twist that's sure to entertain. This show is laugh-out-loud funny, so if you're looking for something that takes itself very seriously, Rick and Morty isn't really what you're seeking.

In fact, there's a whole episode dedicated to exploring a multi-dimensional television, and as the protagonists check out what's on television, most of the content is ad-libbed by its creators. This results in some truly hilarious moments, and much of the series flows in this same vein when it comes to structuring. Don't get it wrong: there's some definitely drama at the core of some of the storylines, and Roiland and Harmon do a great job of hiding deeper truths in the hilarity, but they were clearly looking to make the viewer laugh rather than think too deeply.

Like many animated adult comedies, this series has an ensemble cast that makes the storylines more involved and interesting. While no one can argue that the series isn't about the titular Rick and Morty, there are still some excellent supporting members of the cast. Here is a rundown of the cast of characters in the show:

As you may have noticed, both Rick and Morty are voiced by Justin Roiland, and he does a great job of adding nuance to their characterizations. Justin also provides many of the voices throughout the series, and it was him and Dan Harmon that developed the series and serve as executive producers. Currently, the show has three existing seasons with a fourth forthcoming.

Rick and Morty is a show that delights in putting its characters in absurd situations, so if you like uproarious comedy with more than a pinch of adventure, then this is the show for you. As mentioned, there are deeper themes at play, and if you want a deeper dive, there are plenty of internet fan theories out there for you to explore.

If you want a good example of the silliness of the show, check out Rixty Minutes; the episode features the aforementioned multidimensional cable box. In the show, Justin Roiland does a ton of voices that have mostly been improvised. 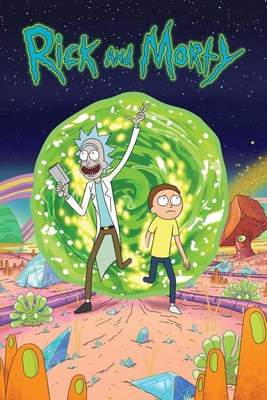 These are Providers which might be available to watch the show.
The official website of this TV-Show can be found here: http://www.adultswim.com/videos/rick-and-morty

* This is a sponsored link / the reviewed TV-Show might not be available with Amazon Prime Video Service / after the 30 days test period Amazon Prime might cause additional costs. The official website of this show can be found here: Rick and Morty
Did you like reading this TV-Show Review? Yes No