Orange Is the New Black - Review

Based on the memoir written by Piper Kerman, Orange is the New Black is a comedy-drama web TV series. It takes place in the fictional prison of Litchfield Penitentiary, where Piper was sent to prison for a crime she committed back a decade prior to the beginning of the show. Chapman was caught with a suitcase that had drug money that she carried for her then-girlfriend Alex Vause.

Piper lived a quiet, privileged life as a member of the NYC elite before all hell broke loose and her life turned upside down.Casting:

Orange is the New Black has a fairly large casting due to the makeup of the prison population of Litchfield Penitentiary along with other occupants of the New York City setting. Taylor Schilling takes top billing as Piper Chapman, while Laura Prepon stars as Alex Vause. Main cast members include Michael Harney as correctional officer Sam Healy. The inmates that comprise the main cast include Michelle Hurst as Claudette Pelage, Kate Mulgrew as Red, Uzo Aduba as Suzanna “Crazy Eyes” Warren, Danielle Brooks as Tasha “Taystee” Jefferson, Natasha Lyonne as Nicky Nichols.Production:

Jenji Kohan read Piper Kerman’s memoir after a friend sent it off to her. She opted for a meeting between herself and Kerman in order to pitch the idea of a television adaptation, while making corrections on notes she took and asking Kerman about her experiences that were detailed in the book. Kerman gave her seal of approval for the memoir to adapted for TV viewing. Kohan stated at one point that the show would focus on characters whose population demographic are not normally portrayed on television.

Produced by Tilted Productions in partnership with Lionsgate Television, Orange is the New Black with Kohan credited as the creator of the show. By November 2011, different parties were in the process of finalizing negotiations before the series was green-lit for release. Katie Holmes was tapped by Kohan to take the role of Piper Chapman, but the actress has other commitments to tend to at the time. Announcements for the show’s casting made by August 2012, and Taylor Schilling was chosen to be cast as Piper Chapman. Jason Biggs was picked for the role of Larry Bloom, Piper’s fiancee.

The show finally aired on Netflix in July 11, 2013. While Netflix is the primary streaming platform.

Review:Dark comedy is nothing new for Weeds creator Jenji Kohan, and Orange is the New Black delivers it in spades. Some of situations that plays out in the show is nothing short of hilarious, with lines that are timed and delivered at the right moments throughout the episodes. One can somewhat empathize with Piper Chapman to her predicament before landing in prison (despite the fact that she broke the law).

The environment of the prison is a very gross reflection of the prisons of real life. Funding cuts, prison privatization, overcrowding, police brutality, racial discrimination and corruption are all heavily rampant in the series. The ability of the prison’s ability to fulfill its obligations and responsibilities as a
correctional facility constantly comes into question.Trivia: 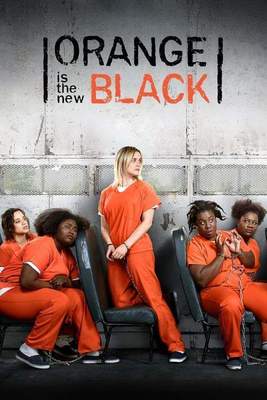 These are Providers which might be available to watch the show.
The official website of this TV-Show can be found here: https://www.netflix.com/title/70242311

* This is a sponsored link / the reviewed TV-Show might not be available with Amazon Prime Video Service / after the 30 days test period Amazon Prime might cause additional costs. The official website of this show can be found here: Orange Is the New Black
Did you like reading this TV-Show Review? Yes No