"Narcos Mexico" Extends The Story Of The U.S. War On Drugs

Although "Narcos Mexico" is listed as a new show or a spinoff from the original "Narcos" which proved a hit for Netflix, it feels like the continuation of the story begun in the earlier seasons created by Eric Newman. The showrunner repeats many of the same conflicts and themes in a new and engaging way which sees the focus shift from Columbia in the 1970s and 80s to 1980s Mexico and the trafficking of marijuana.

The show begins with a voiceover reflecting the unhappy, grim nature of the subject matter. "I'm going to tell you a story, but it doesn't have a happy ending. In fact, it has no ending at all." The story focuses on the story of Felix Gallardo, better known as the Mexican drug lord, El Padrino. Felix begins the show by making his first, faltering steps into the Mexican drug business where small-time operations are growing and smuggling small amounts of marijuana around the country and across the border into the U.S.

Much like the earlier seasons of "Narcos," the antagonist is seen as a shrewd business leader and criminal who must face up to the fact he is trying to turn an illegal trade into a huge corporation. Felix sets out to make the growing, harvesting, and smuggling of marijuana as professional and corporate as possible with the focus on making as much money as possible. Felix shows his power and confidence in the early scenes by striding into the middle of a Mexican military operation to arrest one of the leading figures in his Sinaloa gang. Ignoring the military surrounding his colleague, Felix drags him out of the ambush as he states the reputation and future of the gang rests on the members of the group staying together. The corruption one sees in every aspect of "Narcos Mexico" is focused on Felix at the start of the first season as he commits horrific acts while remaining a loving husband and family man.

In opposition to Felix, the U.S. Drug Enforcement Agency tasks capturing the leader of the Sinaloa gang to the U.S.-Mexican Kiko Camerana. Kiko has been living and working in California where the racism of the 1980s rears its head when he is almost arrested and beaten because a local cop refuses to believe he is a DEA Agent. As he waits for news of a promotion, it is made clear to Kiko that he has very little chance of rising above his current rank because of his Mexican ancestry.

Instead, Kiko is given the chance to extend his career with the DEA by accepting a role with the Mexican wing of the agency in Guadalajara. Felix is also heading to Guadalajara in a bid to turn his small gang of drug smugglers into the giant leader in the Mexican drug trade by joining forces with or overpowering the current cartel leader, El Azul.

Kiko is shocked by his arrival in Guadalajara when he is faced with a friendlier atmosphere than the racism of California, but the potential death of his career. The DEA Agent is told by his fellow agents they do not make arrests of the current drug cartel but are willing to work with those in the drug trade to sell the information they obtain. On his first nights in Guadalajara, Kiko sees members of his own DEA group partying with members of the Mexican drug cartels and obviously selling information to feather their own nests. Added to this is the realization the CIA is far more involved in the Mexican drugs trade than he ever imagined and Kiko begins to understand he is going to have to fight to overcome many obstacles to achieve the ambitions he has for his career

The continuation of the story of the U.S. war on drugs has been handled with a large amount of critical success by showrunner Eric Newman for the Netflix streaming service. One of the top performers for Netflix, "Narcos" saw the return of Newman to TV production after many years working as a producer on a range of movies, many in the horror genre. Beginning his career working with "Saturday Night Live" and its movie production arm, Newman eventually found success with the remake of "Dawn of the Dead" in 2004. This prompted a series of movies in the horror genre to be produced, including many of the films of Eli Roth, including "The Last Exorcism." The Hollywood producer found critical acclaim for his role with the "Children of Men" movie which was nominated for three Academy Awards.

The role of the conflicted Mexican drug lord, Felix Gallardo is portrayed by Diego Luna, who rose to international fame with his leading role in, "Y Tu Mama Tambien" alongside Gael Garcia Bernal. In recent years, Luna has joined the ranks of the "Star Wars" franchise following his leading role in "Rogue One" alongside Felicity Jones. Luna and Bernal own a Mexican production company which has been tasked with producing documentaries trying to highlight the cases of those women who have been classed as missing due to the involvement of various drug cartels.

Michael Pena takes the lead role of DEA Agent Kiko alongside Diego Luna, who produced the movie, Cesar Chavez about the legendary labor leader starring Pena. The actor had been working in Hollywood for many years appearing in small roles on TV and in independent films when his association with writer-director Paul Haggis led to him achieving critical acclaim. In 2004, Pena appeared in "Million Dollar Baby" and "Crash" which were both written by Haggis and led to him gaining prominence in Hollywood. Pena has appeared in the Marvel Cinematic Universe as the sidekick of Ant-Man.

The filming of "Narcos Mexico" takes place on location in Mexico with the show trying to gain access to many areas involved in the story in the 1980s. The show is classed as a sister to the critically-acclaimed, "Narcos" which followed the story of Pablo Escobar and his rise to the top of the Columbian cocaine industry. Netflix and Eric Newman extended the show beyond the end of the Escobar story and tried to find another story which would interest viewers in the same way. The production went into a brief hiatus when a production scout, Carlos Munoz Portal was murdered by multiple gunshot wounds while scouting locations. The murder has not been solved and the Mexican authorities continue to investigate the potential involvement of local drug gangs.

The release of "Narcos Mexico" continued the excellent critical reception of the original "Narcos" series which achieved excellent reviews. The review Website, Rotten Tomatoes gives "Narcos Mexico" a rating of 86 percent with the performances of Lu8na and Pena praised by viewers and critics alike. For many critics, "Narcos Mexico" is an improvement on the earlier Netflix show as it has avoided the pitfalls often seen in "Narcos" of glorifying the violence and lifestyle of the charismatic Pablo Escobar. The moral questions surrounding the character of Felix have been praised by many critics who believe the clash of his family life and violent criminal background center the show.

As with most of the elements in the "Narcos" franchise, the majority of the story is based on the true life events of Felix and Kiko, with some creative license involved. The series creator has been vocal in explaining the background to many of his actions, including the undercover work he completed on the way to uncovering the super field of marijuana which led to a tragic series of events. The crossover aspects of "Narcos Mexico" and "Narcos" are highlighted by the appearance of Wagner Moura as Pablo Escobar in episode five of season one recreating his part from the "Narcos" series. 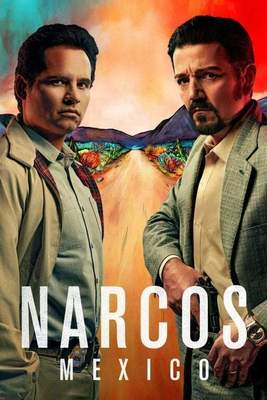 These are Providers which might be available to watch the show.
The official website of this TV-Show can be found here: https://www.netflix.com/title/80997085

* This is a sponsored link / the reviewed TV-Show might not be available with Amazon Prime Video Service / after the 30 days test period Amazon Prime might cause additional costs. The official website of this show can be found here: Narcos: Mexico
Did you like reading this TV-Show Review? Yes No

Sex and the City
Comedy

The Late Show with Stephen Colbert