"Criminal Minds" Draws A Large Following For Its FBI Profilers

The crime procedural show, "Criminal Minds" brought the skill of criminal profiling to the masses when it first aired on CBS in the U.S. in 2005. The crime show has since gone on to reach its 15th season which will be broadcast in 2019 as the concluding season of the TV show. The show was created by the writer and producer, Jeff Davis who would serve as executive producer and showrunner for the first season of "Criminal Minds" before leaving to focus on his reboot of the "Teen Wolf" franchise for MTV.

"Criminal Minds" focuses on a team of criminal profilers who are assigned to different cases each episode with some story arcs crossing over a number of episodes as the teamwork to catch various criminals. In the first episode aired by CBS, "Extreme Aggressor" the team are introduced as being led by the experienced Jason Gideon who has been left burned out and unhappy with his life by the problems of profiling various criminals. It is made clear by members of the team during the first episode they are capable of profiling any criminal and not just serial killers.

"Extreme Aggressor" opens with a young woman being shown a car she is hoping to buy by a man who tempts her to leave her office for a test drive. The disappearance of the woman fits in with other murder cases and leads to the team being given the task of profiling the suspected murderer. Gideon struggles to find the time to complete the profile as he is already working on the case of the footpath killer who has been murdering hikers in Virginia.

The team makes their way to Seattle where Gideon refers to the suspect in the case of the "Seattle Strangler" who has been an active serial killer for some time. Gideon is still struggling with the recent history which includes an investigation going wrong and resulting in the death of six agents because of his own mistakes. As the investigation continues, the profilers begin to suspect the killer has at least one accomplice who is assisting him in his murders.

One of the leading characters in the show, Jason Gideon plays a key role in the development of the team which includes Spencer Reed and Derek Morgan. Gideon is consistently struggling with the cases he has investigated in the past and feels more deaths taking place after he begins an investigation as his own personal failures.

Jason Gideon is played by the actor Mandy Patinkin who has been a successful stage, TV, and film actor since the mid-1980s when he appeared in many musicals on Broadway including "Evita" and "Sunday in the Park with George." In 1987, Patinkin appeared in the movie, "The Princess Bride" and would later take starring roles in the Tv shows "Chicago Hope" and "Homeland."

Matthew Gray Gubler has been one of the major stars of "Criminal Minds" since the show premiered in 2005 and has remained integral as the character of Dr. Spencer Reid. The actor has appeared in a number of impressive roles on TV and in movies, including his role in Wes Anderson's "The Life Aquatic with Steve Zissou" and "(500) Days of Summer."

The series creator, Jeff Davis began his writing career at the University of Southern California's screenwriting course which he passed to obtain a master's degree. The first script sold by Davis would be turned into "Criminal Minds" by CBS and would lead to him being given the showrunner's role for the MTV reboot of "Teen Wolf."

The first two episodes of the "first season of "Criminal Minds" were written by Jeff Davis and based on his own scripts for the show which he wrote to sell the show to CBS. There have been a number of impressive directors used over the course of the 14 seasons already broadcast and the concluding 15th season including Charles Haid, who played Andy Renko in "Hill Street Blues." Edward Allen Bernero also acted as director of the finale of the first season before being credited as the co-creator of the "Criminal Minds" spinoff, "Suspect Behavior." The show is distributed by CBS in the U.S. and by Disney around the world with the show broadcast in Asia, Australia, and various parts of Europe.

Over the course of the first season of "Criminal Minds," the show received mixed reviews with many reviewers explaining they were unhappy with the stereotypes portrayed on the show. The mixed reviews included Metacritic providing the show with a first season rating of just 42 percent but the reviews did improve as the series progressed through its many seasons as the characters became more fleshed out. The decision to award the show a 15th season came as the show has maintained a level of viewership around the ten million marks with the first season attracting an average of 12 million. The lowest average viewership is for season 14 which received an average of just over eight million viewers.

"Criminal Minds" uses a number of phrases and words used by the real FBI, including "unsub" which means an unknown subject. The pilot for the show was filmed in Vancouver and was to be called "Quantico" before the show was renamed, "Criminal Minds." Mandy Patinkin decided to leave the show at the end of season three because he had become too involved in his character and was disturbed by the content of the show. 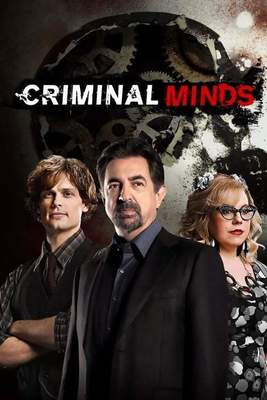 These are Providers which might be available to watch the show.
The official website of this TV-Show can be found here: http://www.cbs.com/shows/criminal_minds/

* This is a sponsored link / the reviewed TV-Show might not be available with Amazon Prime Video Service / after the 30 days test period Amazon Prime might cause additional costs. The official website of this show can be found here: Criminal Minds
Did you like reading this TV-Show Review? Yes No