"American Gods" Moves From The Page To The TV Screen

The Starz TV show, "American Gods" is based on a 2001 fantasy novel by the respected British author, Neil Gaiman. The first season of the show is told through the eyes of a convict, Shadow Moon, who we first meet as he is awaiting release from jail during the last days of his sentence. As he awaits his release, Shadow Moon is told he is being released early from prison because of the death of his wife in a car accident. Overcome with grief, Shadow Moon decides to trek across the U.S. to get home to say goodbye to his wife in the best way possible.

As he is released from jail, Shadow Moon is confronted by the mysterious, Mr. Wednesday who offers him the position of the bodyguard, chauffeur, and personal assistant. Shadow Moon is immediately reluctant to take on the role as he has a single wish to return home and discover the whole truth about the death of his wife. Mr. Wednesday reveals he is starting a new group he hopes will bring about change around the U.S. and, later, the world. Shadow Moon continues to resist the idea of working for Mr. Wednesday until it is revealed the job he had back in his home town is no longer available and he is left with little option but to accept the offer from Mr. Wednesday. Now united, Shadow Moon and Mr. Wednesday head for Chicago to face off against a mysterious figure known as Czernobog.

The opening episode of the show could be described as the very bad day of Shadow Moon, instead of its given title of, "The Bone Orchard." Shadow Moon not only discovers his wife has died, but he also discovers his wife has been unfaithful leading to a number of questions he wishes to have answered. In the midst of the terrible day he is having, Shadow Moon is also faced with the revelation of Mr. Wednesday being one of the old gods of ancient literature. Mr. Wednesday explains he is the god, Odin who has fallen on hard times as the New Gods have taken over the world. Explaining the current situation to Shadow Moon, Mr. Wednesday explains the world is now ruled by the gods of technology who are driving the world towards a terrible fate. However, Mr. Wednesday has a plan to tour the U.S. and connect with the Old Gods who he hopes will work together with him to reclaim their position as the leaders of the planet.

Early in the first episode, Shadow Moon is given a glimpse into the dangers he faces because of his association with Mr. Wednescday when the New God, Technology Boy arrives with his henchman and begins a potentially deadly confrontation with Shadow Moon. As the season progresses, Shadow Moon is faced with moral dilemmas as the criminal aspects of the life of Mr. Wednesday threaten his life and his freedom. Throughout, Shadow Moon must also help Mr. Wednesday tour the U.S. to discover the whereabouts of his fellow Old Gods and persuade them there is a path back to power over the mortals of the world. As he continues his travels across the U.S., Shadow Moon is also trying to handle his grief and understand how the woman he loved could cheat on him before dying in tragic circumstances.

The impressive nature of the cast and production team is highlighted by Bryan Fuller taking showrunner duties for the first season alongside Michael Green. Fuller has a long history of developing high-quality television shows and movies, including "Hannibal" and "Pushing Daisies" which were both award-winning productions for the veteran writer and producer.

Fuller is joined in showrunner duties by the writer, Michael Green who began his career in TV with credits for penning episodes of "Sex and the City" and "Heroes." In 2017, Green became a major name in Hollywood when he had four feature films released in the same year, including "Logan", "Bladerunner: 2049", and "Murder on the Orient Express."

The impressive cast of the show adds to the prestigious nature of "American Gods" and is headed by the legendary British actor, Ian McShane. The actor was born in the northern textile town of Blackburn, England and has been working steadily as an actor since the 1960s when he made his name on British TV. By the 1980s, he had arrived in the U.S. playing a British film director in the primetime soap opera, "Dallas." In recent years, he has become known for taking on a range of high-profile roles on U.S. cable TV, including appearances in the HBO-produced "Deadwood" and "Game of Thrones."

"American Gods" cast is rounded out by a number of international actors including the British-born Ricky Whittle as Shadow Moon and Australian actress, Emily Browning who takes on the twin roles of Shadow Moon's deceased wife and Essie McGowan.

A co-production between Freemantle USA and Starz Originals, the show also counts Living Dead Guy and the J.A. Green Construction Company amongst its producers. Distributed by Lionsgate Media, "American Gods" premiered on Starz in the U.S. on April 30, 2017 and is streamed through the Starz app and has been broadcast by Sky in the U.K. The first season was largely a team effort of production between writers Bryan Fuller and Michael Green, and British director David Slade who had directed episodes of "Breaking Bad" and "Hannibal." By season two, executive producer and author, Neil Gaiman had been given the role of showrunner but departed the production before filming began.

There is always something interesting to find in the first season of "American Gods" when Fuller and Green were in control of the production. The showrunners oversaw the writing and directing of the first four episodes of the first season and are said to have overseen the writing of half of the second season before leaving the show due to creative differences. The first season of "American Gods" holds a rating of 92 percent from Rotten Tomatoes and 77 percent on Metacritic. By season two, the lack of a dedicated showrunner saw "American Gods" fall to an average rating of 56 percent on Rotten Tomatoes. A third season has been commissioned by Starz new showrunners promised to be in place in time for the show to try and return to favor with critics and audiences alike.

As with most adaptations of popular novels, new characters have been added and others removed. One of the characters added to the TV production is that of Vulcan, an ancient Roman God of fire who was inspired by a statue of more than 50 feet Gaiman saw when he was traveling through Birmingham, Alabama. The casting of "The X-Files" star Gillian Anderson reunited her with Bryan Fuller after she had earlier appeared in his series, Hannibal. Anderson and Fuller revealed the showrunner offered Anderson the role of Media when he attended a performance of the play, "A Streetcar Named Desire" which the actress was appearing in. 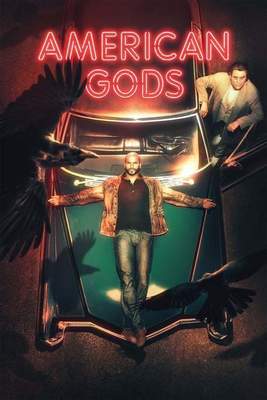 These are Providers which might be available to watch the show.
The official website of this TV-Show can be found here: https://www.starz.com/series/americangods

* This is a sponsored link / the reviewed TV-Show might not be available with Amazon Prime Video Service / after the 30 days test period Amazon Prime might cause additional costs. The official website of this show can be found here: American Gods
Did you like reading this TV-Show Review? Yes No